Last night's model was just phoning it in, forcing me to take more drastic measures with gesture. Really, they're things I should be doing more anyway, but listed below are notable departures that made this girl's stiff, bog-standard poses more flavorful... 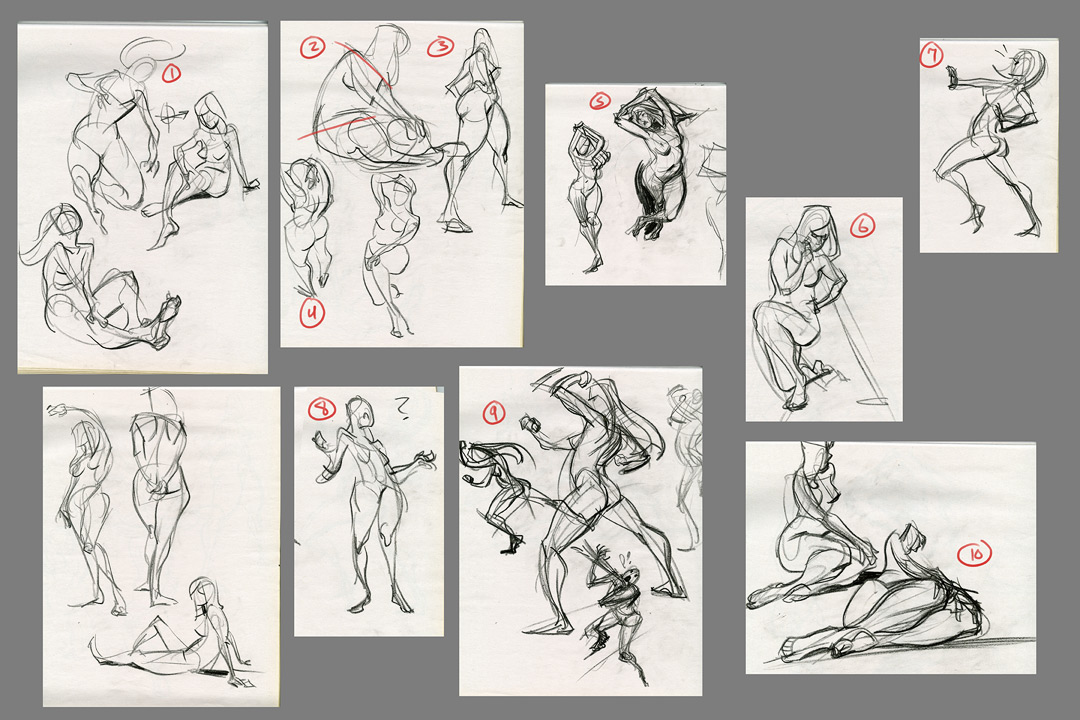 1) Camera angle changes! Here we see her from above during a dull, lying-down pose in profile, and also from a front 3/4 when the view I had was also just a profile. I hate profiles!
2) more drastic weight shifts
3) worm's eye camera
4) bird's eye camera
5) interpretive torso twist -- Her features (including her raised arms) were squared up, perpendicular to the ground. Boo...
6) cleared a line-of-sight pathway to an invisible object on the ground -- Her legs were in the way.
7) Extreme push. Again, her body was very up-and-down here, so I went for more of a recoiling "Get away!" type of thing.
8) "Arms up for no reason" became "arms up in inquiry" (The question mark is such a cheat!)
9) Couldn't tell if her pose was more defensive or more attacking here, so I tried some different stuff. Again, the pose she pulled was very up-and-down...not a lot of forward or backward momentum.
10)Trying to be cool and experimental and change the p.o.v. while fisheyeing the camera lens. Probably needed to curl her legs more underneath her to get that effect right...

What I eventually want are for reaches to look like reaches, relaxed poses to look relaxed, startled poses to look startled, etc... I suppose I could just go for more shadow information and try to flesh these drawings out more anatomically, but I think it's more important to convey a clear action/story point, even if I have to fabricate one myself.

It's worth mentioning that I wouldn't even be considering this stuff if not for the Drawn To Life books. They've really opened my eyes by emphasising (and reemphasising) important points about gesture drawing. They're only just beginning to sink in.

i like the changes, reminds me of stuff we had to do in college. "Imagine you are doing the pose on the other side of the room," and other stuff like that. Looks like you had some fun with it and took something boring and made it worthwhile and challenging. A constant task for production art if you want to keep your sanity!

I love those books they are good stuff, simple and straight forward, huge and cheap.

It's a lot of the same lessons over and over again, but that's exactly what I need to drill that shit in. Walt Stanchfield's legacy!

great thinking and drawing Paul! Keep it up it's really inspirational stuff and you're making leaps of progress!