Post update : I killed the comments on this thread, as one of the participants mentioned specific names and locations that are best left undisclosed. I do this not to backpeddle -- I stand by every statement I've made -- I just think it's important to keep their identities and whereabouts anonymous. The session I attend is moderated by a good man, with good skills and good intentions. Even though it attracts the kind of element I abhor, it's not my wish to tarnish the session itself.

Anyone who'd care to have a lively debate with me on the subject is welcome to contact me privately at djunderfoot (AT) gmail.com. 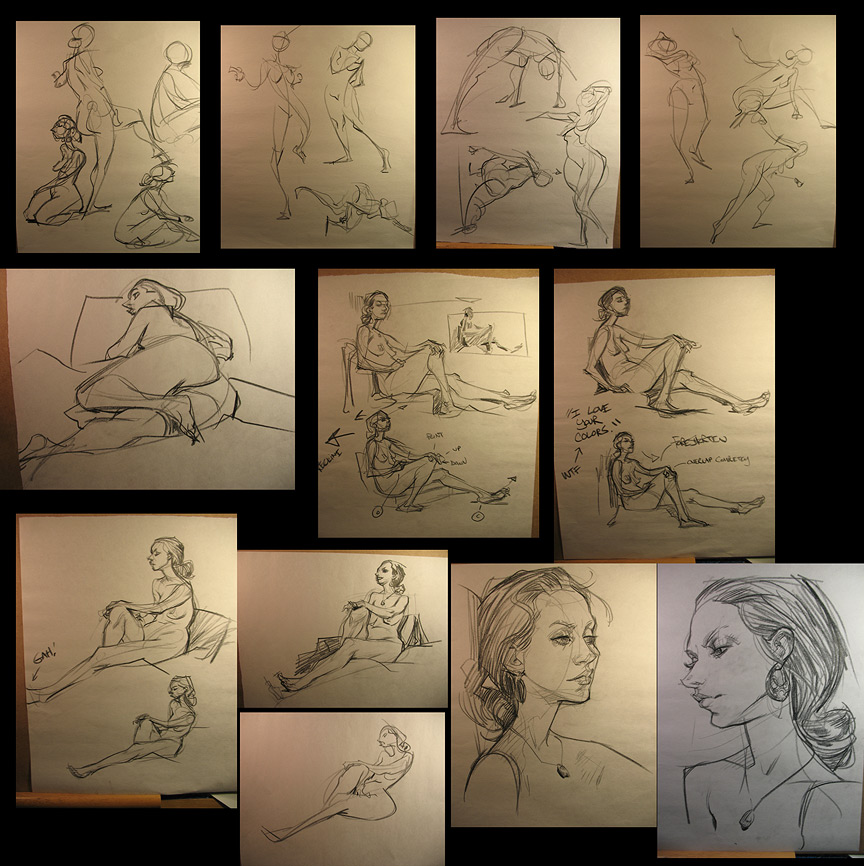 The above dialog didn't really happen. Well, the first two lines did, but I stopped myself before giving ol' Crabby the thorough thrashing she deserves. A beautiful model held a pose for 3 hours, only to be transformed into yet another formless, pastel discharge. But of course, that's the model's fault. How can Crabby be expected to portray beauty under such conditions? The gall!

I struggled with today's pose. It was hard. It's my own fault for getting distracted by all the shit that goes on. I watch half the people file out after the first two hours. They come, sit blankfaced through the gestures, do one unsuccessful drawing, then dust their hands off and say, "That's that!"


The mockeries they make of these women -- they're so much worse than any slander I could possibly deliver in these posts. And it's always women. Young, gorgeous women. But do they err on the side of the un-horrific? No. When they aren't reducing them to 80s vector graphics, they're drooping their features so as to resemble Native American chiefs. They placate each other by saying meaningless things like "I love your colors." Not "I love how you handled the rouge on her cheek." or "You really nailed those cool shadows, and oooh, nice warm bounced light on the underplanes!" -- "I love your colors." Last week Oshkosh B'Gosh gave the model a literal toucan beak for a nose. Jurassic Park takes naps right in the middle of the poses. You only have to look at his work to tell he's completely numb to the experience.
I was once told, "Don't hate, congratulate!" I have a better version : "Don't hate, evaluate...then hate."