*Don't sue me, copyright owners! I'm only using these images to draw from. 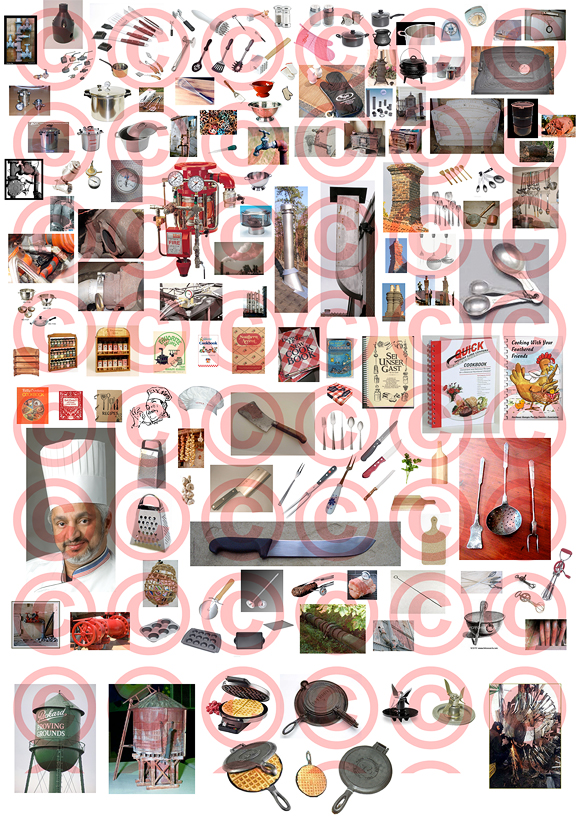 Mental notes going forward :
-Oven mits are two-tone (colorful on top, pale on bottom) and have words stitched into them, or a picture of a rooster or something lame like that.
-Cookbooks have a lot of checkered red and white on them. And many are spiral bound, so you can lie them flat while cooking. Spiral bound, gingham Necronomicookbook...made of stitched human flesh...
-Meat cleavers are fucking brutal.
-2 headed mallets/tenderizers are also badass.
-Pressure cooker valves and meat thermometers rule.
-old ovens = creepy
-bloody cheese grater!!!
-Skewers are nasty looking.
-Cake mixers look like they'd be a bitch to draw -- fuuuuuuuck that.
-Putting a brick chimney on him in addition to metal pipework could be a nice material breakup.
-Dent and ding the metal wherever possible -- rust and globby solder marks galore.
-Maybe break down and give him a chef hat?!?
-Added : waffle irons! He has waffle irons on his feet. Observation : waffles have FOUR QUADRANTS
-I'm thinking he'll have a water tower somewhere on his back...you know, in case the blaze gets out of control. I'd suggest he has charcoal inside him, but I definitely think the fire comes from him. It's magical demon fire!
-Spatula City! SPATULA CITY!!!