I've pinned a bunch of my concept work from Darksiders. You can see it here. Thanks to everyone at Vigil Games and THQ who gave me clearance to do this. 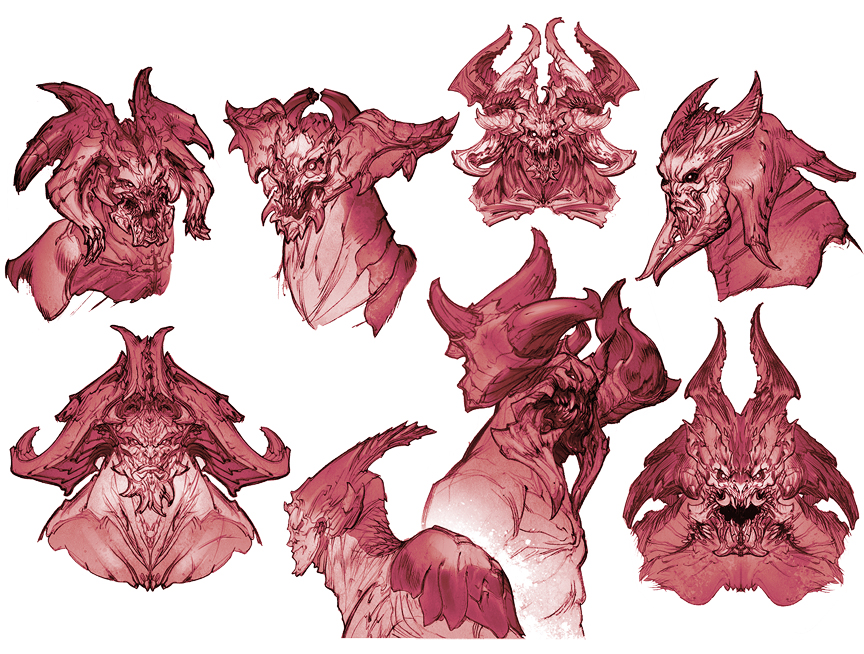 I had a big, long speech prepared about my personal journey at Vigil and how cool working on Darksiders was, but I think the work (and of course the game) will speak for itself. Here, instead, is a portion where I discuss Joe Mad. I figure fellow fanboys might be interested.

You can't talk about Vigil without touching on its most notable front man, creative director and comic legend Joe Madureira (pronounced "MAD-UH-RARE-UH" -- it's Portuguese). To get an idea of what working with Joe is like, imagine living at the foot of an active volcano that, without warning, spews forth torrents of scorching-hot art. Over the years I've probed Joe for secrets, sometimes offering up small animal sacrifices, and have come away with a few useful tidbits :

1) Erase it until it's right. Joe works in graphite pencil (12 x 2.0 mm HB leads + lead holder + lead sharpener), covering up the more finished portions of his drawings with a sheet to prevent smudging, and is in no way reluctant when it comes to eradicating what he feels isn't working. Chris Lichtner would remark that Joe "carves an image out of a page" like an archaeologist unearthing a relic.
2) Work large and reduce. Unless we're talking about a doodle scribbled on a legal pad with a ballpoint pen, I've seldom seen Joe draw on anything smaller than an 11" x 17" sheet. If he feels confined or his drawing is in any way compromised by the edges of the page, he'll simply tape another sheet onto it, gatefold style, and keep going.
3) Gesture = energy. Joe's loose, swooshy underdrawings are a marvel to behold. Even before he pours on the detail, you can still get a good feel for what's happening. He starts with the big, general shapes and refines. Limbs or even entire bodies begin as whipping, anamorphic wedges. Heads are indicated with ovals. Hands are given their own mini-gestures. Joe will never, ever skimp on a hand, as he believes them to be just as expressive as faces.
4) "Cool over correct." This was actually one of Chris Lichtner's many catch-phrases, but I think it was made in observance of Joe. When a fan of his Battle Chasers comic pointed out a size discrepancy between panels for one of his characters, Joe's reply was (and I'm paraphrasing) "Calibretto's hand is exactly as big it needs to be in a panel in order for it to be awesome." Can I get an amen?
5) Familiarity is your friend. Joe knows that art is communication, and that you can't let the viewer sit there trying to decipher your intentions. The picture has to hit them like a punch to the gut, so they immediately go, "Damn, this guy is a powerful medieval overlord in a fantasy setting, and that axe he's carrying would cut me in half." If a drawing requires an explanation or backstory in order to read, it's a bad drawing.
6) Importance. When a design lacks importance, it can sometimes be attributed to patches bearing no iconic patterns or recognizable features. You see lots of sculpted faces, sigils and etched/tattooed runes in Joe's work because they transform plain surfaces into something with character. What might have been merely functional now stands out as something memorable.
7) "Fuck it up a little." Scarring, wear, fatigue, huge chunks missing -- imperfections add interest and suggest history.
8) "Accomplish more. Do less." I firmly believe Joe doesn't flaunt his abilities until the moment they're needed, and only when it will make the most impact, whether it's a magazine cover illustration, game concept, or a pony drawing for one of his daughters. I tend to run myself ragged, flailing and groping for some fragment of an idea, or just drawing for its own sake until something cool accidentally presents itself. Joe doesn't leave nearly as much to chance. He already knows, within a reasonable degree, what's going to please him and how to go about getting that result, and he's usually comfortable with it. In the time many of us will spend second-guessing a piece, he will complete several, his rationale being "Drawings are like that old Doritos ad : Crunch all you want, we'll make more." Translated by Chris Lichtner, "Nothing is sacred... the coolness isn't contained within the art, but within the artist... and he lives it...doesn't get attached to any of his drawings."
---
I also saved my very first letter from Chris, who now art directs Diablo III. He was just as instrumental in getting me to Vigil, and has been a good friend and invaluable critic through it all.

I've seen your site, and absolutely love your work. Amazing!

I just recently joined VIGIL GAMES to work with Joe Madureira, who used to draw XMEN/Battlechasers (I used to own a company called Liquid!, and have worked on DAXTER PSP before joining Vigil), on a yet unannounced next-gen title, and we're looking for a top notch concept artist.

I don't know what your current work situation is but I would be interested in getting a chance to talk to you, and see if you had any interest in working with us down here in Austin, TX. I'm really excited at the prospect of working on this project, and only want to work with really top notch guys, and we both love your work, so that's pretty much a no-brainer.

http://www.autodestruct.com/images/fanboy.jpg
Getting this kind of attention, at that time in my life, from these sources, was better than anything I could have hoped or planned for.
Vigil recently finished moving into a brand new office with plenty of room for more passionate developers of all disciplines. I can't wait!

wow darksider stuff is awesome, thanks for sharing.

yo yo, this might get long but I don't care. I love your blog, love how much u think about your work, it is mad inspiring for a guy like me. I am a concept artist in the casual game market with aspirations of becoming a better designer. Looking at the darksider work is so frigin awesome so thank you for posting it. On a little side note I studied with Mike Mattise for some time. I think his ideas and concepts of teaching design are brilliant. I found it cool u mentioned his book. I know he would appreciate that big time. So thanks man and once again I love the blog!!!!!!

I have followed your work for several years but i never knew you had this much awesomeness in you. The style of this project seems to match your style perfectly. Anyway. love the environment concepts - very inspirational. Hope to be working on the same project as you one day.

Sweet! Thats enough inspiration to keep me going for a while. Thanks for the post!

Awesome post. Great tidbits of information with a great attitude and perspective.

One of my current goals is to really push myself to be able to ideate and design around a topic to no end. I appreciate you showing us how you do it

Awesome awesome. I love learning from you. Thanks so much for keeping this blog going!

welllll f*ck....awesome dude. Best of luck with the game!

Thanks for sharing all the precious info!

These designs, along with the other images on this blog are inspired. You've got a great portfolio.

Thanks everyone! And Eric -- I bashfully approached you at Comic Con last year and managed to coax a sketch from you. It's one thing to be able to design a bunch of stuff, but to place many elements in a dramatic storytelling drawing with thoughtful composition AND give it such a bold, fluid treatment? AND in such generous portions? Whoosh. What you do is crazy-hard and crazy-inspiring. You humble me, sir.

Hey Paul! Congrats on completing Darksiders and the concepts you created for it is totally AWESOME mode! Thanks for sharing the info and must of been a great experience working with Joe and the rest. TIGHT!

Hey poke and prod Mr. Southam to post some of his Darksiders work!

Yo're genius. Maybe, in the next sketchbook, you can put these all Darksiders stuff... I'll buy it like the others 2. Gongrats, master!

awesome, man! congrats on darksiders and on your company's new digs! and holy crap on all the darksiders concepts! thanks for sharing! :]

Hope Vigil gets some awesome new people, can't wait to see what else comes outta there :D

Awesome stuff Paul! Really great reading the stuff you're learning from Joe Mad. It inspires me to get off my ass and do some more drawing.

So I'm fashionably late to the Darksider Party, but Holy-Hell what a party it is! Two-words Richards, Awe and Some! Thanks for posting the concepts - truly inspirational stuff.

Instant classic. Darksiders is really like one of Joe's comic books coming to life. I love the insane details and humor in your works.

This is just my opinion, but seriously man I got this game more for your art than Joe Mad's.