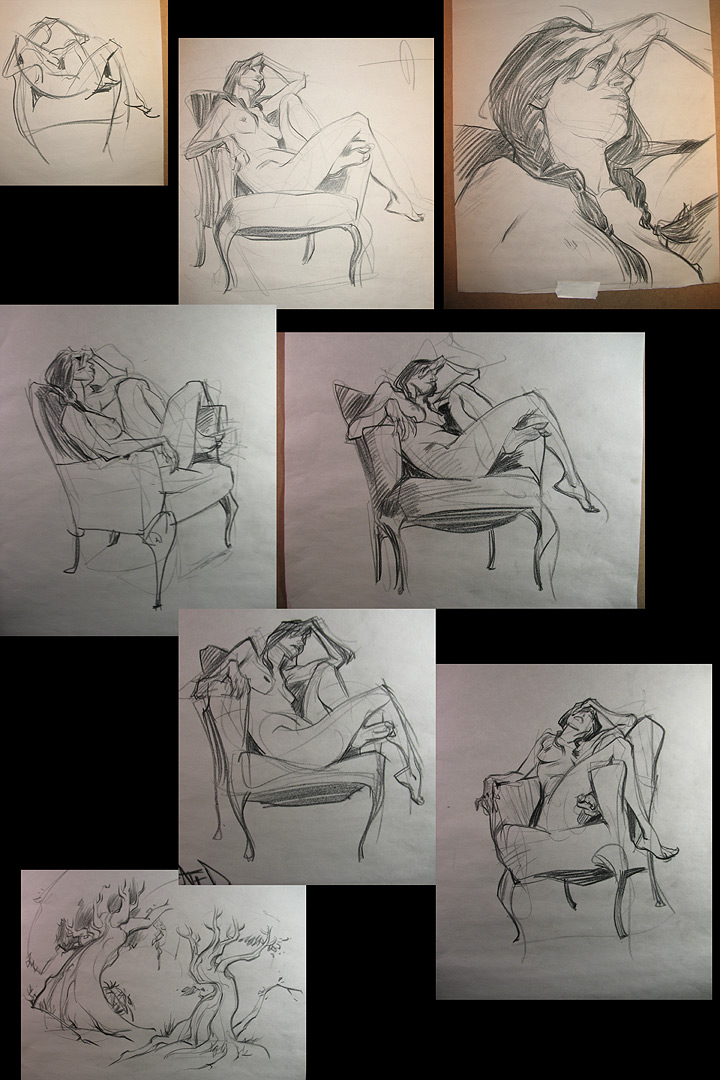 The vibe the model was putting off was "defeated" or "Christ, I can't believe I'm doing another sitting pose." The drawing near the center where she's slumped conveys this better than the rest.

When the 2 hour session wrapped, the room erupted with strange applause. "Yay [model's name]!" someone behind me squealed. "Yes," I replied under my breath, "Yay for sitting there." My friend Matt, clearly unaware of my jaded attitude at these things, chided me. "Don't be a dick. They're just saying thanks."

On one hand, he was right. The model showed up and did her thing, and as sitting poses went, it had a good amount of character. But really? Applause for a pose where every limb was pretty much completely at rest? You might as well applaud a bowl of fruit. "Way to stay in that bowl, fruit." Now if that bowl of fruit got up and did a handstand or some cartwheels (as this model has practically done in the past, it should be noted) -- yes, applause.

A girl to my left came early and set up an elaborate painting station. A phalanx of supplies was splayed out, ready for action. The model showed up, got into position and -- oh no -- the girl packed up all her shit and took off. I'll give her the benefit of the doubt this time and assume something important cropped up (30% off sale at Michaels), but I'm betting dollars to donuts this is what went through her head : "Oh, unkind fate! I don't have a particularly good view of the model, and now there's nowhere for me to relocate my cumbersome art fort. Guess I can't be creative now."

And you draw like a god. Thanks for sharing those. =)

LOOOOL. I thought I was the only one with such sarcastic and prodding comments of nude models and the people drawing them.

Thanks for the laughs.

On an artistic note, do you ever go the entire length of a long pose on a single drawing? Or do you consider the gesture to be more important than a full render figure?

I just went through your entire blog from finish to start; it was well worth the time and the snarky looks from my boss! You've got some great work in here, I'm looking forward to more updates already!

Yeah, you're a dick, but it's hard not to be in these situations. I think I get 10x more opinionated at life drawing because these wackos can have an effect on my performance. And by wacko I mean anyone even remotely louder or more active then a dead hamster. It's hard to concentrate and draw in a big room full of other humans. Because humans move and smell and make noise. And then there's the weirdos I quietly laugh at. Unless they're too close, then they get under my skin because I drove all the way there, paid $15 and then Mr Nose Whistler sets up right next to me. It's nice to see the life drawing weirdos aren't confined to So Cal.

You have no idea how much I want to have a "cumbersome art fort."

So what's up with the trees - did you just give up on the girl?

Trees were my warmup!

And Csmif -- I should totally try that. My attention span evaporates after 20 minutes, so I'm ever starting fresh. 'S' why none of my shit looks finished, lol!

Y'know Paul, maybe she realized she had to catch her flight to help orphaned children in Haiti.
Man you are a dick.