"I honestly never got too into life drawing classes." a friend of mine admitted in a recent chat. "Like i never saw someone go in bad and come out incredible."

I think there's some truth to that. It helps to come to the table with something -- an agenda, a hunger, a quest.
I'm reminded of the documentary Scratch, where DJ Shadow talks about the art of digging.
"There's the promise in these stacks* of finding something that you're going to use. ... It has almost a karmic element...I was meant to find this. ... Just being in here is a humbling experience. ...I honestly feel like the people that dig don't stop digging 'cuz it's a part of who we are. People that don't, you don't have to. It's not going to make a bad dj good, but it'll make a good dj better."
*lifedrawing sessions 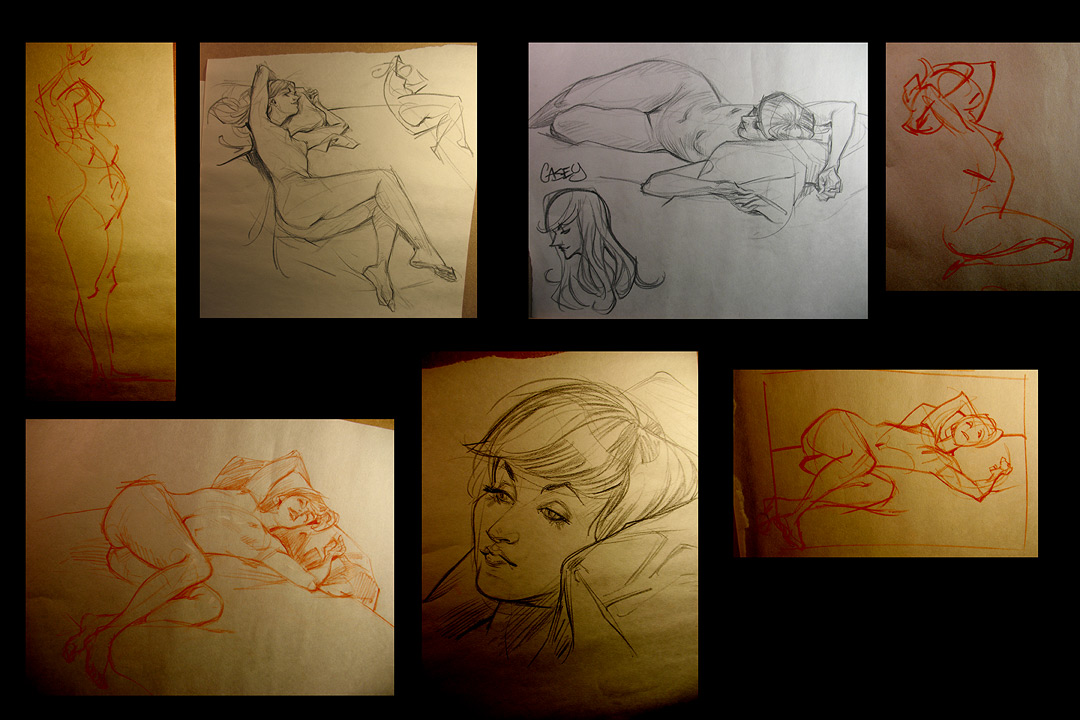 You never know what you're going to find on a dig. Last week I learned a neat thing about calf muscles and ankles. This week I locked in on something I do that's damaging : I'm stretching the figures out too much, like taffy, and not letting them overlap and bunch up where they need to. The result is something like butterflies under glass. There's a subliminal urge, especially coming from a concept art background, to show rather than obscure. Push overlap! That's my new mantra.
The moderator was kind enough to lend me a book "The Undressed Art : Why We Draw" by Peter Steinhart. In it, the author says "We are less engaged in producing than we are in practicing. It's a refrain that runs through the work of even the best draftsmen and draftswomen. We do it not because we're good at it, but because there's some prospect that if we keep doing it, eventually we may be good."
The dig continues...

i put a lot of stock in life drawing. Before I started going, I drew the same mistakes over and over again, without realizing what was off. I knew something was off I couldn't place it, esp with legs. Without the figure as reference, I didnt know what I was doing wrong. When I started life drawing, I was like: NO WONDER my drawings looked crappy, I was missing a ligament there! Oh that muscle looks like THAT flexed! Almost every session, even if it isn't a eureka moment, something new and subtle sneaks into your subconcious. I think there's something to it!

totally. 6 hours a week is a minimum, keeping up with good life drawing practice makes a world of difference.

btw, The Bettie Pages - Pt. 1 was awesome! Excellent stuff breaking down the process like that. Tanking sexy to a science.

I'm curious about incorporating the proportions of the fibonacci spiral into the girl's shape, seems to me that there's a math to using the ideal proportions

re : fibonnaci // It was brought to my attention that "fi" is something artists incorporate naturally, since we're so used to seeing it in nature. There's fi all over the body...I'll get someone I know who's all into that to break it down sometime. I personally don't like art to become math, but I can't deny that it's there.