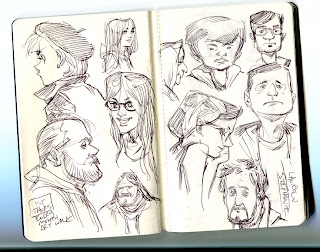 Gonna do something different this time.  Gonna talk about what's going through my head as I'm doing these 2-10 minute sketches.  It's usually nothing profound, but here goes!

Because my understanding of anatomy is still infuriatingly shallow, I'll sometimes give myself a "dumbed down" way of understanding a certain region of the body.  Here, it was the hollow of the back, just above the butt.  To me, it looked like it had been scooped out with an ice cream scooper.  Vivid shit, right?

The scooped out part was apparent here, too, so I ghosted it in with a little guitar pick shape, so I'd remember it.  At lifedrawing, I'm not interested in anything I won't remember later.  This is why I typically omit light patterns, as they're erratic and non-transferable to my other work.  I'll bet that if I DID focus exclusively on light play, I'd begin to notice useful recurring patterns, though.  Hrm...

On this one, I was paying attention to how this guy's elbows (corner points on the body) were at rest on his knees (also corner points).  I talk about this phenomenon in greater detail on Babe Lab.  It was something I picked up on late last year, and now I see it wherever people are being idle.  (My elbows are on my knees as I type this.)

Here I was thinking "This guy has a dangly weiner."

I also thought it was interesting that [above] his nipples were practically at the bottom of his pecs, like gorilla's.  I watched a series of UFC fights later that evening, and couldn't get this image out of my mind : Two gorillas in an octagon, beating their chests and taking mad swings at each other.

The pose below kinda blows my "corner" theory out of the water.  See his right hand hooked over his left shin, right in the middle?  Oh well.  His left hand is still on his left knee.  Unrelated : since he was sitting, the bottom of his right leg was drooping where it wasn't in contact with the stool.

On this one, I could see that his right hip was clearly higher, meaning the right leg was the one supporting most of his weight.  Higher hip means higher buttock, so the left sinks below it.

It became really apparent that drawing a burly dude means making his upper toso almost triangular, with a teeny-weeny waistline.

Drawing this twist required a calculated "stacking" of parts, to make his right arm look more forward and his left more backward.  To drive the latter home, I scribbled a little black over the left arm.

I was fixated on the weight-bearing leg below.  I wonder, since even a staight leg is still slightly bent, if the lower thigh, knee and shin can always be thrown into slight shadow in standing poses.  Depends on the source of the light, but still...curious to see if this resurfaces.

Here he was with his gut sucked in, all manly-like...  (straight)

On the symmetrical poses below, I intentionally moved away from his center to give myself a non-redundant view.  Full frontals and full backs are borrrrrring, plus I could see too much of his nutsack, and nutsacks are gross.

Big lean. Hands on knees.  I thought the sweep of his left leg was beautiful.  Yeah, that's right, I said beautiful.  So see?  I can swing both ways.

Boring laying-down poses.  I couldn't do anything interesting with them, so I focused on something I'm weak at, namely hand plants.  You can see I'm still struggling with subtleties here.

This one, I think, was 20 minutes.  I tried to get the hands to a more respectable level than I normally do, and while the feet still gave me sass, I noticed that the shape I was seeing on the toenails was more like a triangle than a parallelogram.  Portraying a thing authentically has more to do with getting its shape right than its exact proportion.  I'm going to force myself to get really real about the primitive shapes I'm seeing from here on.

Last one of the session.  Figured I'd copped out on the previous two reclining poses, so had to give this one a go.  Moved around the model until I had a view I liked, but still couldn't do much with it.  That's my fault, for the record, not the model's!

This post has been a bit self-indulgent, but I hope you enjoyed the play-by-play!
4 comments:

I have the privilege of speaking/demoing at Anomaly this year with my new Seattle pal, the brilliant Tom Scholes.  (pronounced "SKOALS" -- like the chewing tobacco)  The theme this year is "Study From Life", so in order to have something worthwhile to say about that, I'll be surveying fellow artists as well as doing my own personal studies.  Tentative, pretentious lecture title : "Remix & Additional Production : A Concept Artist's Guide To Visual Synthesis."

This will be my first (and hopefully not last) time visiting Canada.  See you there!

Some out-and-about sketching from this week.  I'm thrilled to have new art friends wherever I go, all fighting the good fight, content to sit and make slight motions of the arm and wrist, interspersed with light conversation (and occasional heavy drinking).  You're the best people I know, and you know exactly who you are.

Guy at the bottom left was pretty compelling in person, with his radar dish ears. 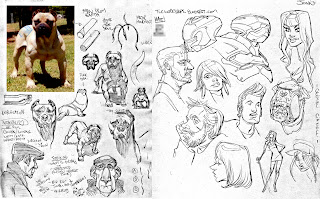 This one came out a little better.  I halved the background shadow on the other one, and didn't drop a cast shadow onto the ground.  Looked unnatural.  Noob mistake! 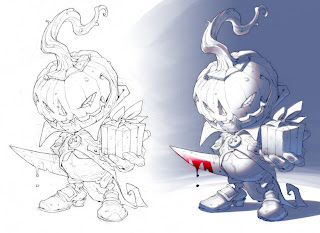 I will do your work justice, Edouard!
No comments:

Edouard Guiton does perfect art.  His art is also perfect for light/shadow practice. 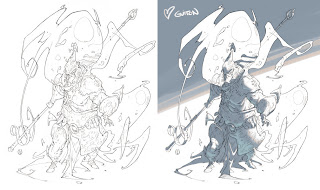 Would be cool to do this in tandem with a friend and see how we both tackled lighting the same drawing. *hint, hint*
3 comments: 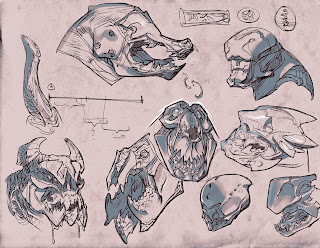 Finally, a dude!  This guy was pretty awesome. When a model is cool and personable, you want to do a better job drawing them.  And you forgive them when they accidentally rip a fart.  (Hey, it happens.)

You know you're having an off-session when it's more fun drawing the participants than the model.  Today's was one of those.

Even so, each model provides its own revelations. This particular specimen had ENORMOUS, thimble-sized nipples. You could hang pictures from them. But here's the useful bit : Their cast shadows showed the *exact direction* the light was hitting them, like a sundial. So, you know, the next time you're unsure of your light source, check those nips to see how close you are to high noon. If her back's turned to you, or her breasts are in shadow, or it's a dude who's had his nipples sawed down by a belt sander, you're screwed. Make camp and bed down for the night.

btw -- I have to confess that I feel like a total sleazeball when all the people in a lifedrawing session are male, leering at a much-younger female model. What must be going through her head?   I know this is "Art" with a capital "A", but man, is this what it's come to?  Being an artist is supposed to be cooler than that.
2 comments: 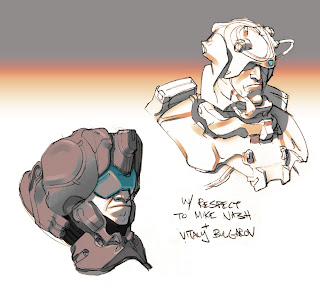 Came back from lunch and my coworker Whit Brachna had left me an offering. [below] I call the brunette! 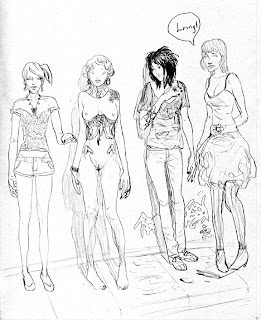 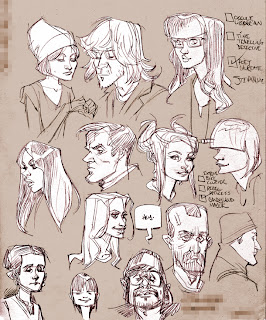 Tristani the Sunblade Crown of Heavens 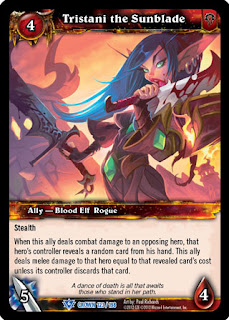 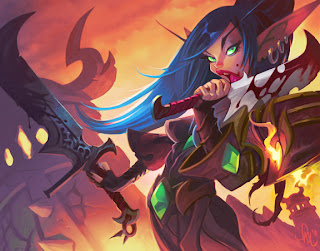 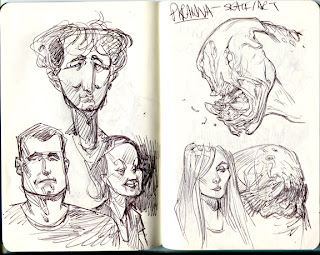 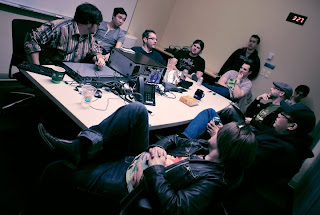 And here I am, drawing with Robogabo and Sparth...like it ain't no thang. 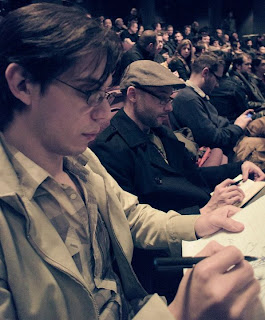 People at the bar... 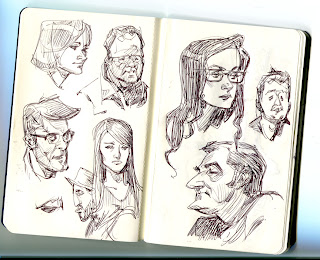 I once heard that all the cool, iconic ships in Star Wars were based on letters, the more obvious ones being the X-wing, Y-wing, etc.

It occurred to me that just about any from-scratch design could be born from random, modified letter shapes.  You can get a lot of mileage out of an "L" or an "I" when you flip, scale, rotate, mirror, extrude and skew the character into perspective multiple times.  What does an array of "A"s look like?  A bundle of "B"s? And what happens when you take a three letter word like COD or FAT or MAN and try to make something out of that?  Answer : infinite abstracts.

I seem to favor a stem that curls to the right.

PM - Digipen -- Don't think I've ever seen a model do (let alone hold) a headstand.  This chick was a badass.

Filled half a mini-moleskine in an orientation meeting today...mostly with people looking disoriented.

Got in okay. Just hooking up scanner to laptop to make sure everything works. Does!