While on the topic of trees, here are some sketches I did for an area I wanted to see called "The Tortured Forest."  There were already some wooden creatures in the game by this point -- thought it might be neat to have more corrupted vegetation.

Skulls/mouths in trees were sort of a no-brainer.  "Put a skull in it." was common art direction at Vigil.

Lastly, I pitched, "Death's going to be skippin' through forests choppin' down tree golems, right?  Dude.  He should have a CHAIN-SCYTHE.  Eh?  Eh?!?!"  The image of Death as a lumberjack, let alone a skipping lumberjack, didn't appeal to enough people, so I was told to go back to my concept hole.

...I should have left out the part about the skipping.
No comments:

Everthing in the Darksiders universe (Darkoverse?) required a stylistic wonk, plant life included. These were all for the Marker area.

...and some little shrubs as well.

In games, big towers or statues or fountains or steam-powered zeppelins are referred to as "POI"s or "points of interest."  Here's an angelic POI that began as thumbnails...

"Take it to a higher degree of completion, but eh...remove the tower."

There's a lot of stuff I know about color and light now that makes me wince at this image.
5 comments: 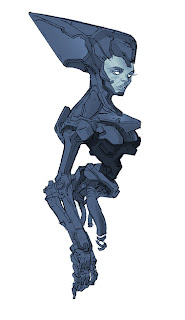 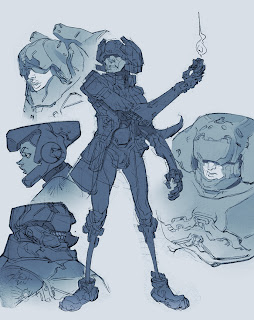 From what I recall, the in-game Crystal Spire is neither spire-y, nor crystalline.  Nevertheless, here are the drawings that were done.

Some angel keys thrown in here...

And whatever these are...

...and an angel guard.  I wanted them to be placed as statues on podiums, springing to life and slashing you.

At some point there was going to be an angelic judge.  This turned into...some other kind of judge.

Send me an Archon.

Archon took a "Let's do Tyriel from Diablo, but not." kinda direction, but this wasn't always the case, I swear!

The techier, mechier vision I had for the angels didn't gel with the game's fantasy setting, and so was abandoned.  What was kept was the notion that Archon is a being of pure light...like Tyriel.  *sigh*  I wanted to make his suit a containment vessel, implying he could light-jump to other, bigger ones.  Like, you'd encounter him and think, "Wimpy, glowy dude.  No biggie.", then he'd zap himself over to some giant angel-mech and you'd be all, "Fuuuuuuuuuu...."

Also thought it'd be cool if Archon was plugged into a throne, a battery powering the citadel he chills in...

...but, since he's a boss, he couldn't be some glorified light fixture.  No epic throne room, no energy arcs.  I don't think Vigil paid me that week.

Send me an angel.

To counteract yesterday's wraiths, here are some angel commander sketches with elaborate headdresses that never got used.

Instead of making one of these, they decided to pop a different head on one of the DS1 angels and have done.  Deadlines, man.  Deadlines.
No comments:

People tell me, "Paul, you work for an industry that reinforces negative cultural views of women.  You're part of the problem!"  To which I typically respond, "Nuh-uh!!  I was just going off the pre-established skeletal rig!"  (I omit the fact that I helped establish said rig on DS1.)

So yeah, wraith variants.  I really, REALLY wanted there to be an electro-wraith, or a bug-wraith, but we all got together and talked about it, and felt this reinforced negative cultural views of electricity and bugs.

It's good to take the moral highground every now and then.

Ostegoth was a character Joe had more or less nailed.  But those green crystals and jangly-keys?  That's aaaaaalllll me, baby!

Here are two preliminary turns I did, just to figure him out.  His spirit world ganja pipe sorta reads like a saxophone...

As one might expect, I've been accumulating a lot of sketch pages during this flood of Darksiders II posts.  Here's some sad lion/ram characters I did as a demo for a coworker.  Tomorrow I'll go back to angels and demons, promise!

TEASER : I have an exciting new method for drawing lips which I'm keen to post on Babe Lab soon!  It's so simple, it makes me want to puke. 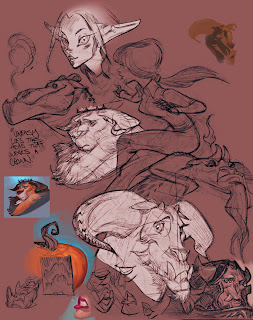 The Darksiders II enemy I'm most proud to have been involved with was the Scarab Hulk.  The final asset turned out awesome -- sculpt, texture, animations, sound -- everything.

I wish I could say this was my kneejerk reaction, but it really was a team effort.  [Fun fact : This was the last thing I did for Vigil before leaving for Blizzard, hence the doodle at the lower right.]

I began with thumbnails, natch...

The direction then became something like "Combo the body of 8 with the back of 7." yielding stuff like this.

But then we needed a better head.  #17 was the winner.  Not too shabby for a Frankenstein!

Bonus : initial drawings for "The Scarab Mound", a spawn point for the little ones.