"How high can you jump?"

"Can you make a leap into another area?"

"You can make all kinds of marks.  You can form it out of anything as long as you're describing."

"Go for the information right away.  See even more and try to put it down."

"See if you can push it, and then go out to the other parts."

"I want to get you thinking this way, rather than the usual slashes and 2x4s."

"Accidents are good.  Surprise yourself."

"Trust must be established and built."

"It's the small changes that really matter."

"Doing this [notches in a small, seemingly insignificant nook on a knee]...sets me up for that [draws a calf muscle in response to it]."

"Try to care about that."

"Commit right away, so you have something to stand on."

"Look at him more than you look at the paper."

[pointing to a leg that's too much of an uninterrupted curve] "You gotta get away from that."

"You got a little bit of a...Marvel leg right there."

"Why did you make that ribcage come out like that?"

"See it quicker.  What do you need to close that gap?"

"You can go as slow as a snail [and still suggest motion/direction]."

"I think it's time for a masterpiece.  Don't you think?" 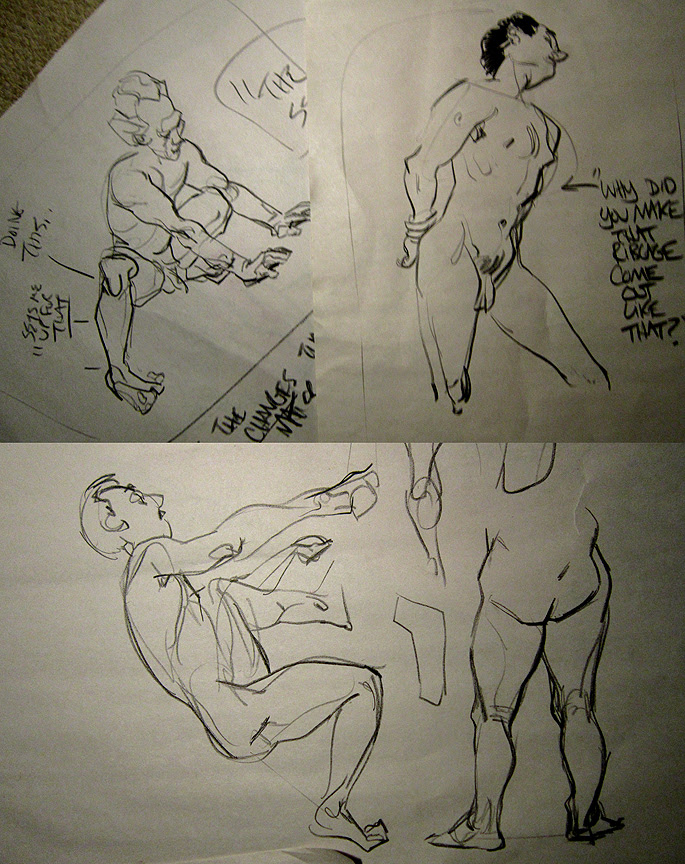 We're off to a strong start! 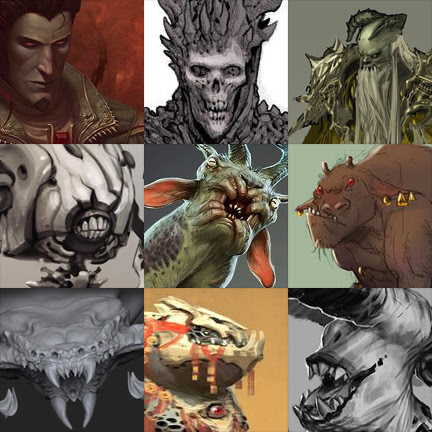 My developer brethren : How many times have you made/dismissed something thinking, "Oh, they'll never go for that."? What if "they" was "you", in this case? What if, for the first time, your creativity was king, and a big, fat, juicy "yes" was waiting for you at every approval gate? That's the spirit of Substrata.

My version of the game (seen in the samples below) takes place in an afterlife for plants. You play as Dandelion, a weed on her quest to become a flower. 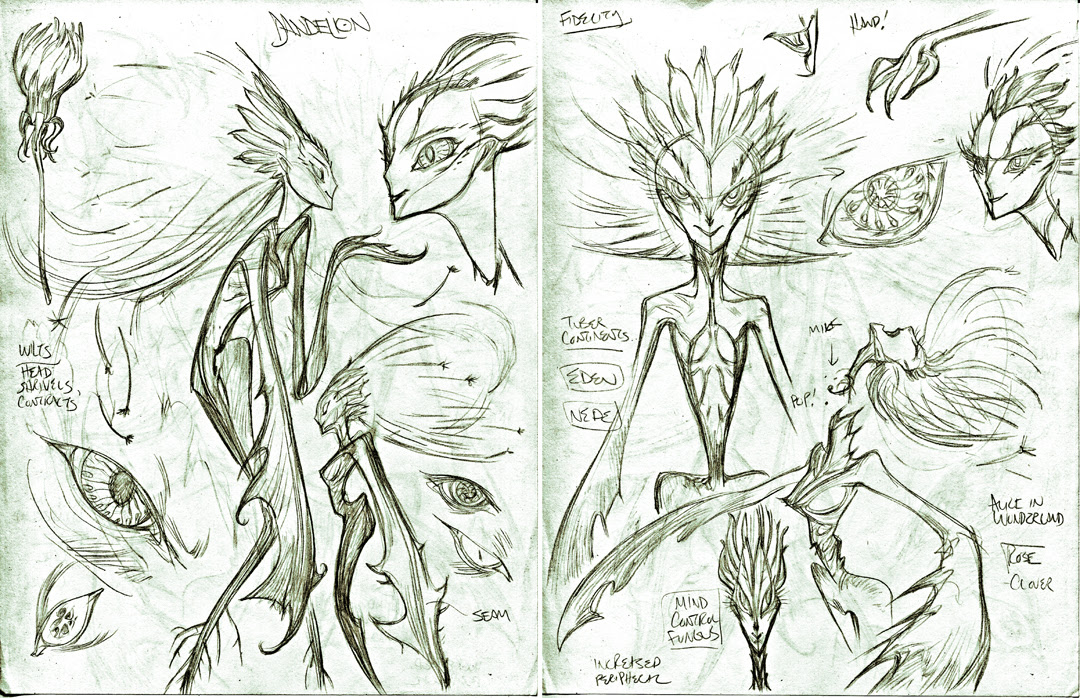 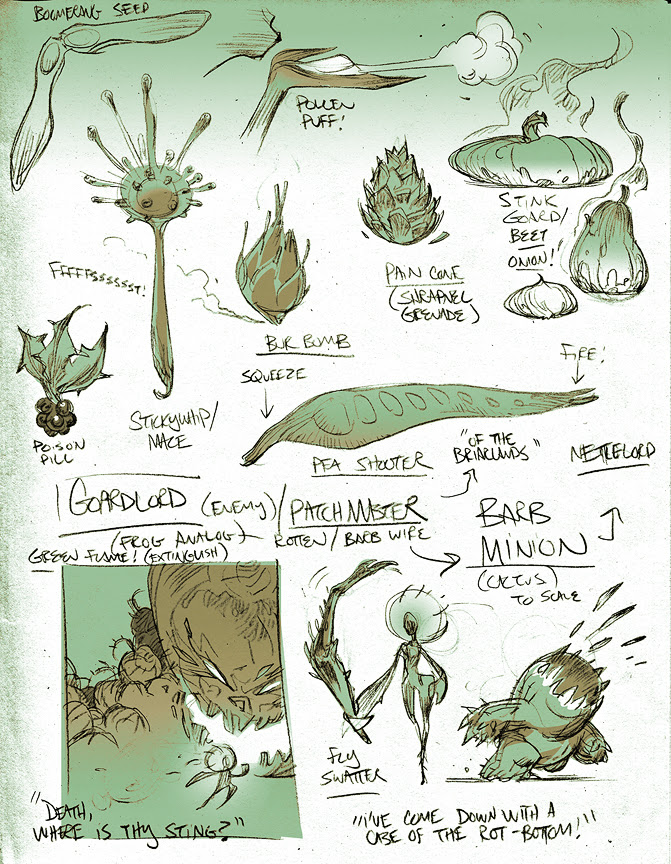 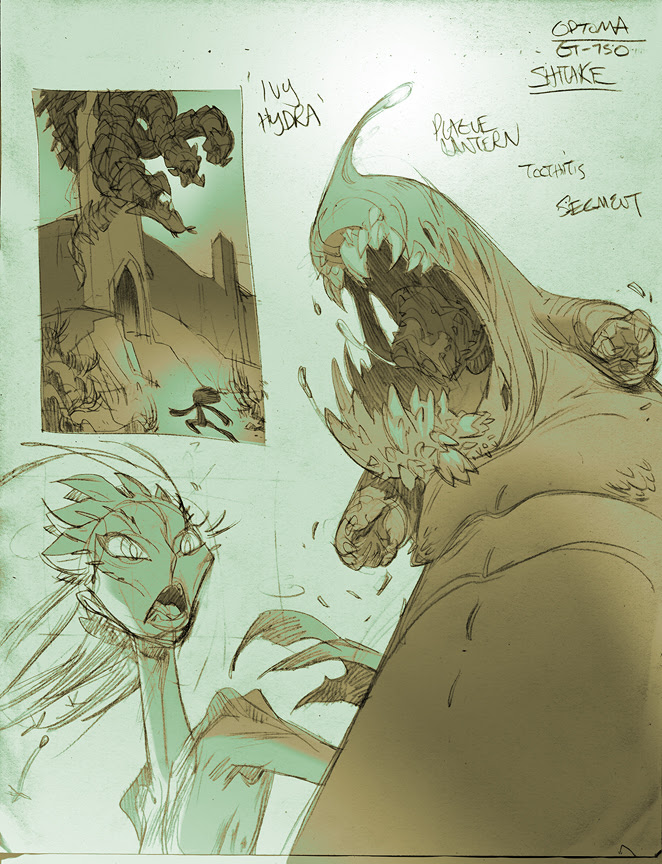 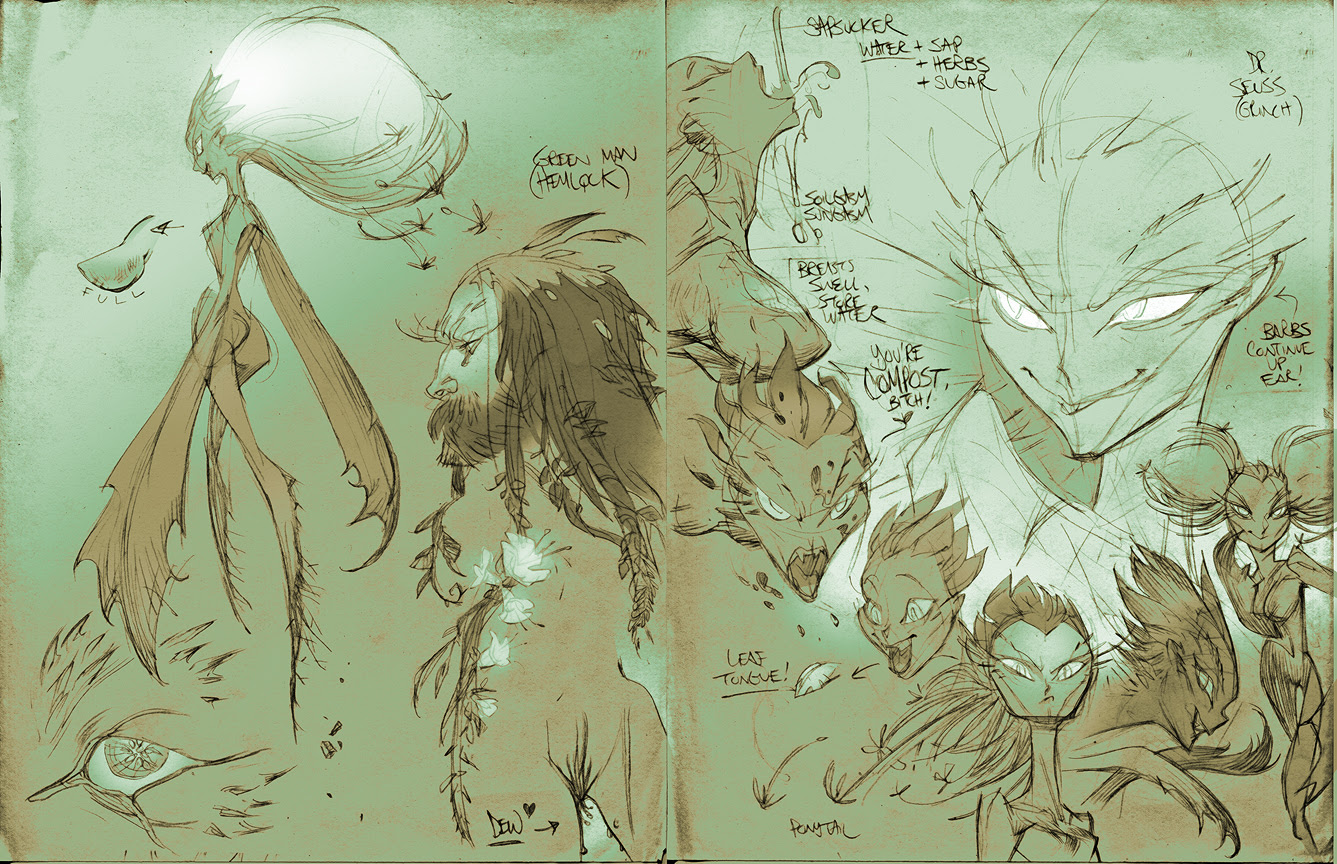 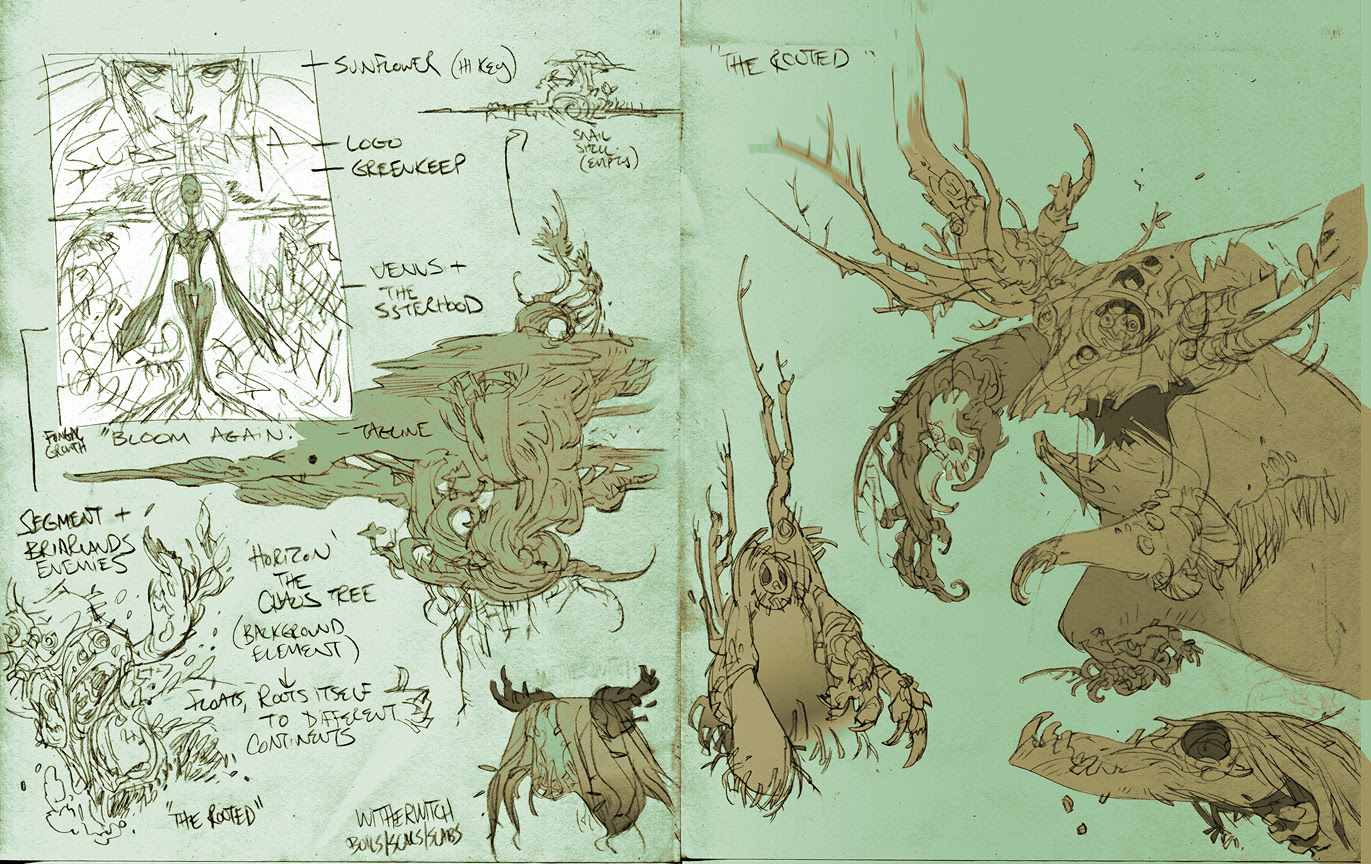 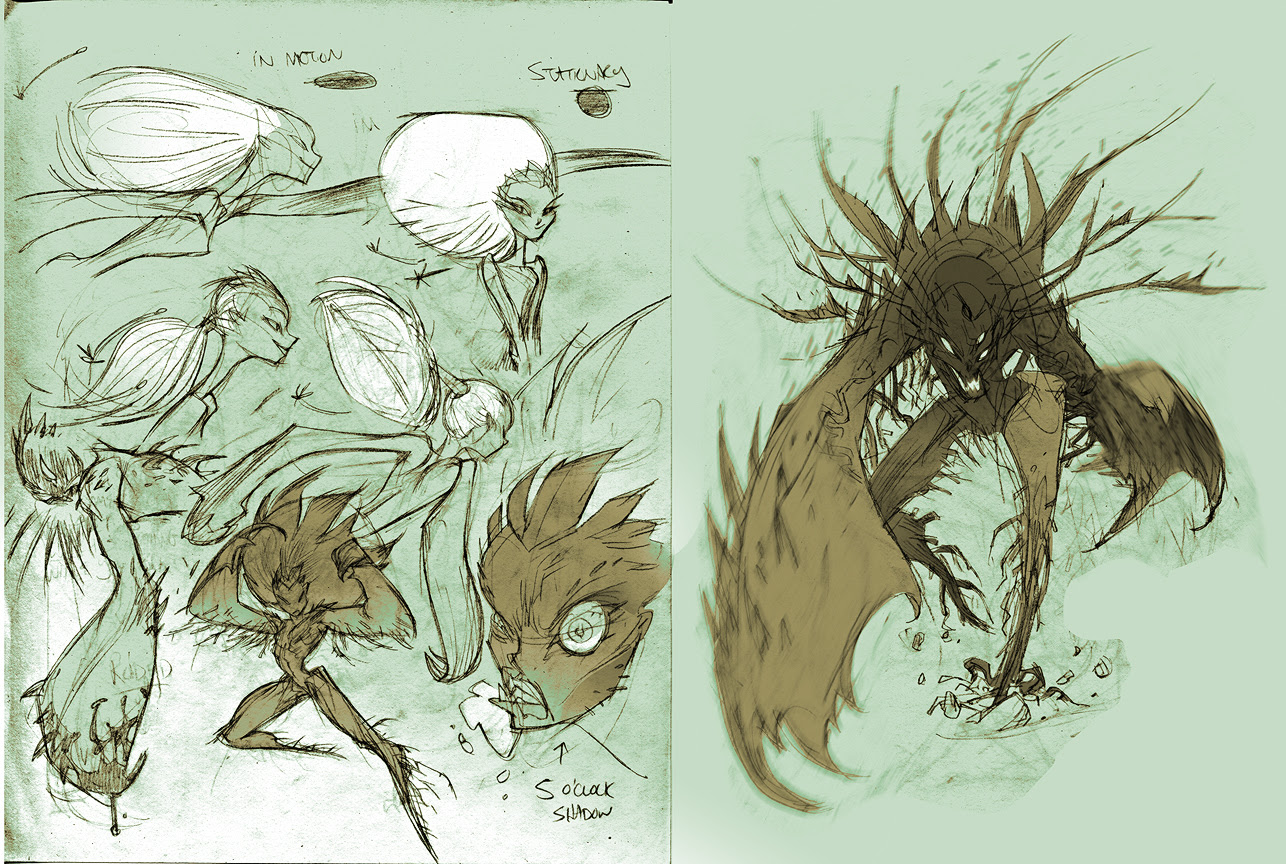 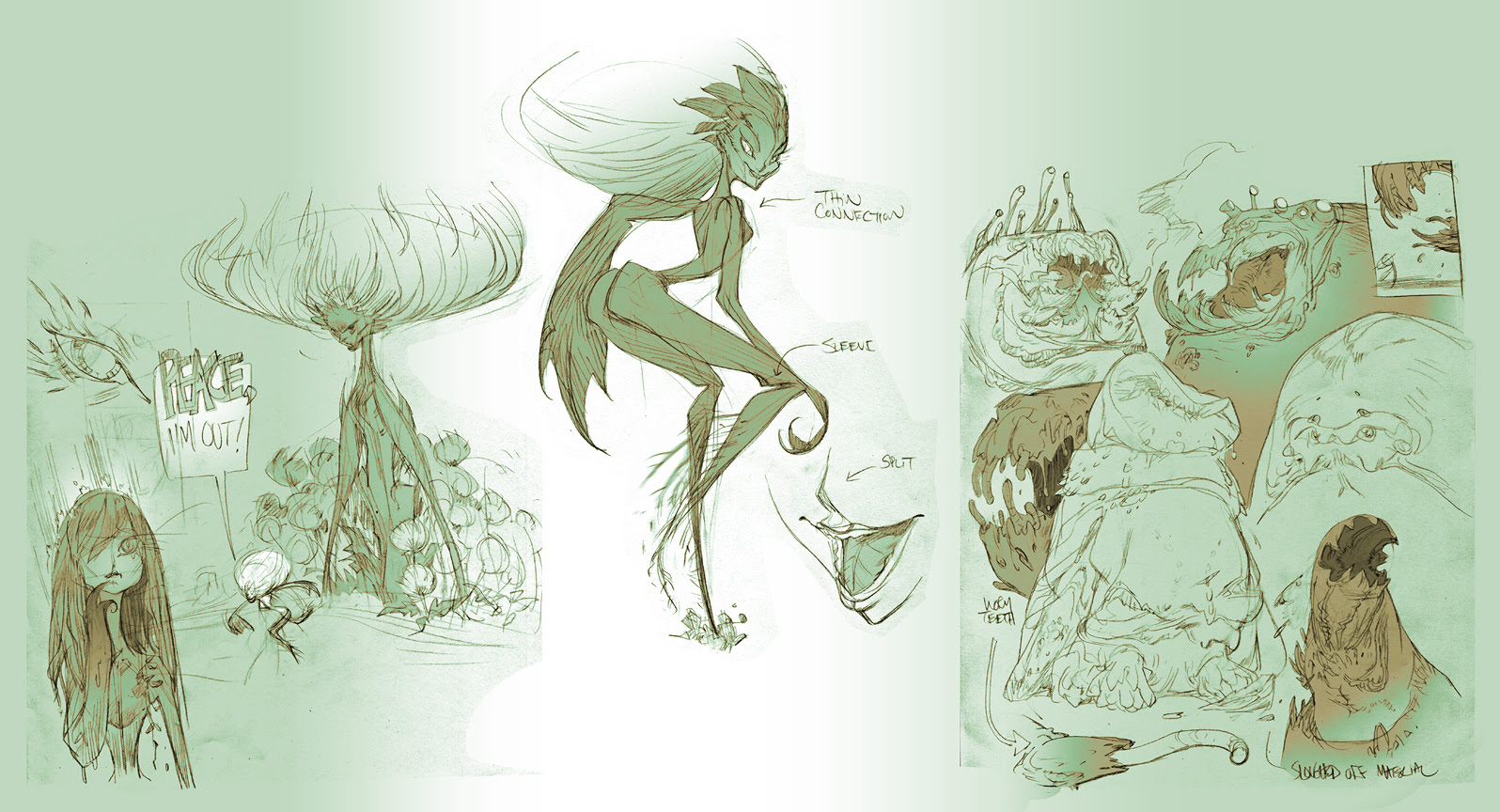 But that's just my (very early) take. Others' interpretations have been wildly different, which is the whole point!

I feel like my brain has taken a beating. A much needed beating.

"Draw that stretch. Don't segment her!"

"Feel your own drawing. If you can't, how can someone else?"

[in reference to the physical differences between humans] "They're not 'aberrations.' They're realities."

"Her whole body is a face."

"What's your [mental] position when you do a drawing?"

[in reference to your own drawing] "These are mirrors."

"You have to be the un-moving mover." / "Move sideways in your thinking."

[lays down an Alphonse Mucha illustration] "Try drawing her like that."

[pointing to a roughed-in, indicated foot] "...And why that?"

"Is that really the way her hip looks?"

"She's like a poem. How many lines are in a poem?"

"Don't take the weight off."

"You're prisoners of your own kind of cage."

"How are you going to move the ball forward?"

"You can always go back."

[points to model] "She's trying. Shouldn't we be trying as hard as that?"

[in reference to the day one crosses over into understanding / success] "You cross over now." / "Why wait?"

"Try to fuck around with stuff."

"Stop trying to be perfect. You're not going to get it. You're not a camera." / "What is 'accuracy?' It's just a fine observation." / " "The feeling rules." / "If you're really feeling, your accuracy will improve."

"Don't choose to bore yourself with that." / "Why choose to be boring?"

A knee can be a portrait.

I wonder if "I'm doing fan art." could be a good position to draw from. "This thing I'm drawing...no matter how mundane it is...I'm going to geek out about it. I'm going to glorify it."
1 comment: 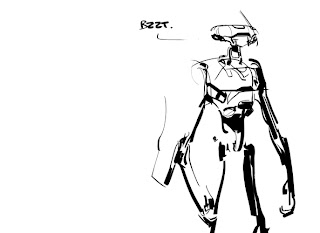 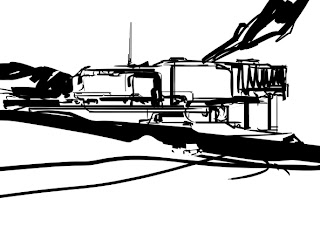 "Sculpt him down onto the paper."

"You have to have more marks."

"There'll be time to be 'the sensitive artist.'  Just put it down."

[of other artists] "You can lean on these guys."

"Let go of the realism thing." / "Your job is to make it exciting.  Make it interesting."

"Remember, you control the drawing.  The drawing doesn't control you."

"When something nice happens, just keep multiplying it."

"Go to the inside.  Go to the outside less often." / "Draw the inside stuff."

"You're trying to find ways to play."

"Think about a letter of the alphabet."

Goddamn, do I love being held to a higher standard.
---

"You can do whatever you want."

[as an exercise] "Draw her with four lines."

[as an exercise] "Make her head tiny.  Make her legs long."

[as an exercise/practice] "You're five again.  You don't know what you're doing."

[as an exercise/practice] "Draw like a crazy person.  Let go.  Let what you see be the lead."

[as a mantra/practice] "'This time I am going to do something different.'" / "Swim out there and find something else." / "See more than what you've been drawing." / "What wasn't there last time?" / "[Use any method] that'll start an exploration." / "It's not a route system."

"Get yourself out of yourself."

"Draw ahead of your hand."

"No matter how long a pose is, the thinking should be similar.  You should be just as free."

"It has to matter.  Have as much empathy to what you're seeing as possible."  / "You're searching for the feeling in your line." / "Push the experience you're getting as you look at her."

"She's right there in front of you."

"What do you want to happen?" / "As soon as you realize it's not going to go the way you want, start again."

"It's hard to give up the lay-in, but it flattens."

"Don't think of hands as hands."

"Don't fall in love with your stuff."

"You have to activate your mind and coordinate with your hand.  There's no other way."

"You should see this as a door."

-Granularity occurs chiefly in the extremities, but can be "discovered" elsewhere, if one allows oneself.
-Feeling the "organic nature of the human design" helps you draw better humans.
-Representation (the way we draw something) isn't just subject-dependent; it's also mood/feeling-dependent.  So if you want to represent something purely in straights, or pretend the body is composed of interlinked spaghettios, that's your prerogative, and may just help you come to greater understanding.  Sometimes it won't, but you won't know until you try.  Peter Clarke's core message so far : try different stuff.

Tonight I was reminded of this MC Paul Barman lyric : "I'm rapping, son! / If you think you think outside the box, you're trapped in one! / I'm advancing the artform.  De-pantsing a fart storm. / Some people don't like thinking.  I guess it's too hard for 'em."

It's not in the wrist; it's in the mind!

The last workshop I attended was instructed by Karl Gnass, on the subject of two-figure composition.

Tonight, because I'd like to think I choose good teachers, I attended the first in a series of advanced lifedrawing classes by Seattle's own Peter Clarke.  I barely had a moment to draw between scratching down all the pearls he was dropping.

"Speed isn't everything."  / "The more you have up here [in reference to what you observe with your eyes] the freer you are there [on the page]." / "Commit to the lines you're making.  Believe in them from the start."

"[Construction] is a crutch.  A ramping up.  You shouldn't need that."

"Take a chance; it's just one drawing."

[in reference to going over a previously established area of the drawing] "Are you retreading or retreating?"

"You have to get out of your own way."

"That was enough time." [to capture the pose]

"You're always searching.  The drawing is really never done."

[before you draw] "Take a good look at him."

"Try to draw the whole guy."

"Every line you make is a thought or a feeling.  Draw with empathy; it'll matter more."

"The art will come out of the observation and the honesty."

"How else are you going to add onto what you know until you experience what you don't?"

"You are pulling out and pushing away." / "You're moving forward and backward in space." / [quoting Rodin] "My only obligation is to draw the space." / "Be sensitive to the space." / "Create movement." / "Make change." / "Draw the difference."

[in reference to Gustav Klimt] "He showed sensitivity to the organic nature of the figure."

[in reference to studying others' language / mark making] "Use these guys!  Come up with your own version of that!" / "Books are important."

[of gravity] "Think of the weight.  He's melting."

At one point, Peter handed me a chopstick with a piece of charcoal rubber-banded to the tip, and had me grip the opposite end, just to feel a different tool.  "Don't try to use it like the [China] marker."  With my hand out and away from the drawing, I was able to skip around much more freely.

But my biggest "take" from the evening was that [to quote The Dude from 'The Big Lebowski'] "My thinking about this case has become very uptight!"  I have been *willfully* depriving myself of enjoying the ride...of the experience of drawing another human, all of whom are different.  In my search for simplicity and efficiency, I've been cutting off pathways to deeper understanding.  Throttling my own growth.  My "mature" prioritization of "Oh, I'll save that bit for later." negligently skirts the importance of that which *initially* drew my eye.  Trusting that eye -- slowing down to pay attention to where it leads -- will bring me into uncharted territories where more enjoyment may be derived.  I will give myself permission to do this.

Another memorable quote from the evening [in reference to not delaying one's artistic gratification] :

"Eat nothing but dessert."
-Matt Barrett 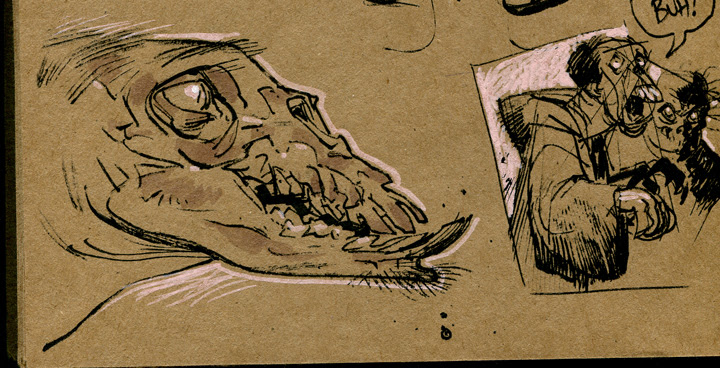 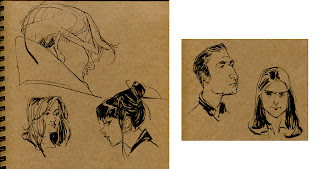 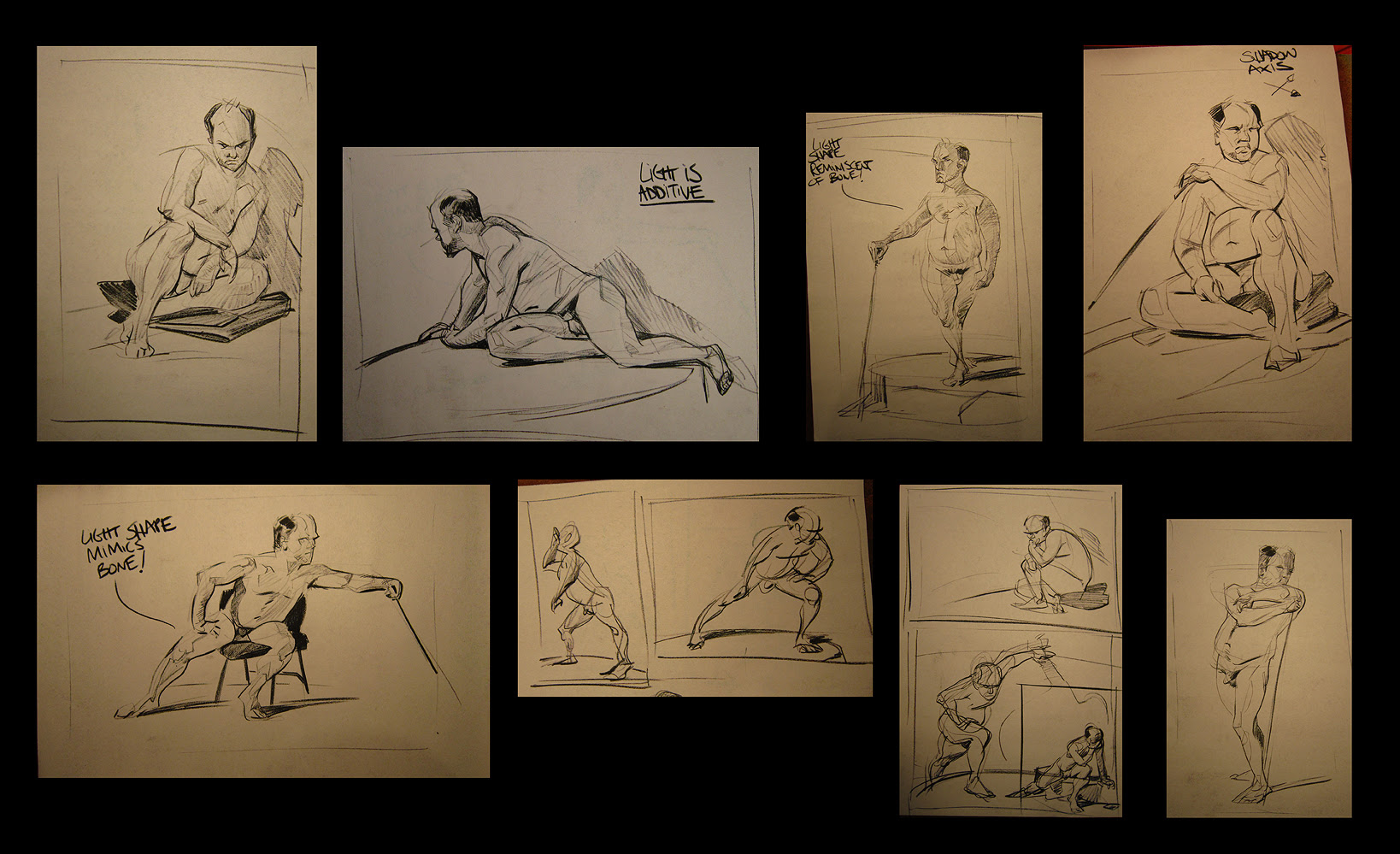 Note to self : think more about this in art and in life.

Pic for The Flashbulb + 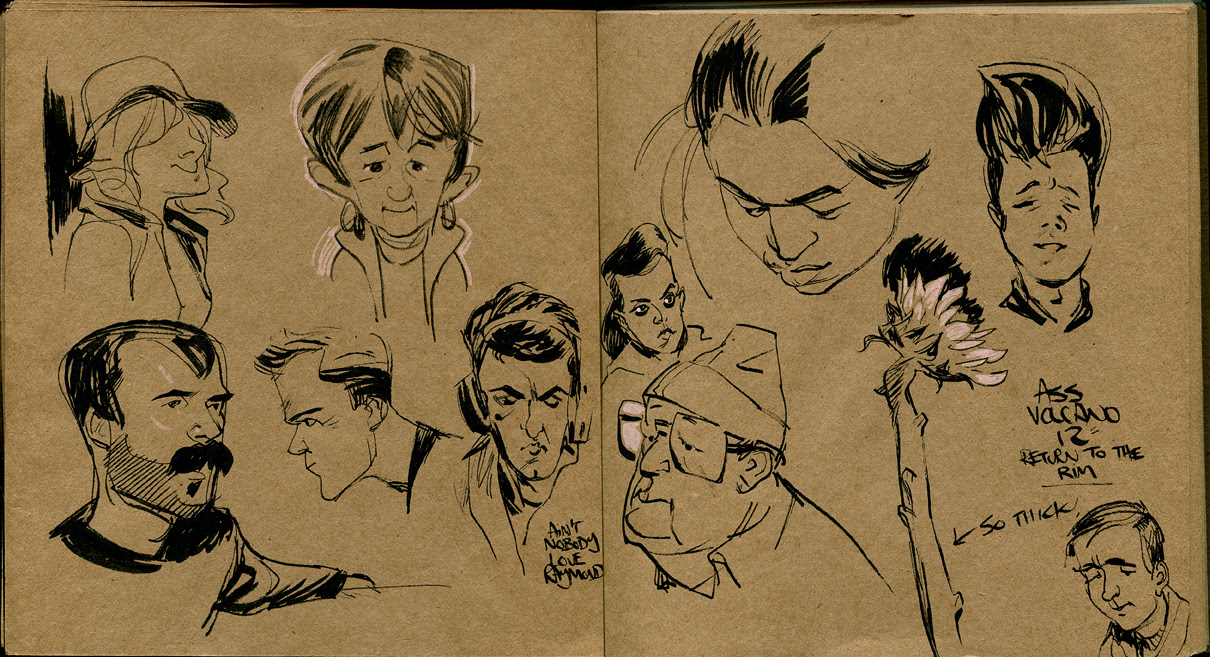 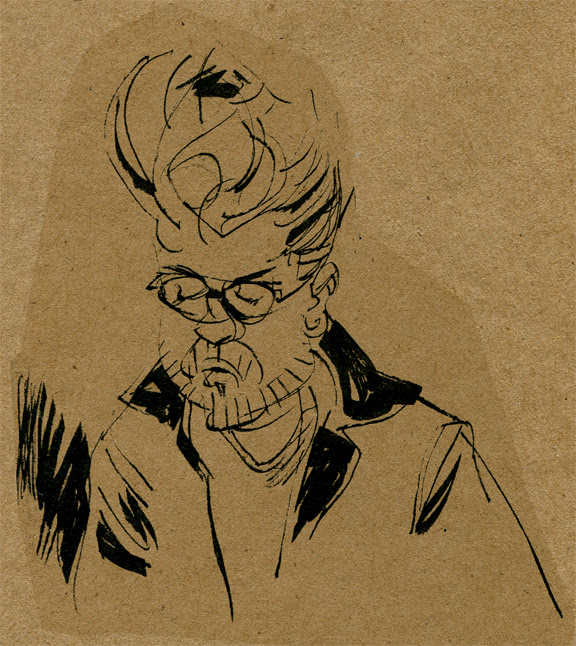 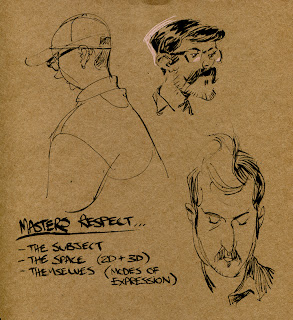 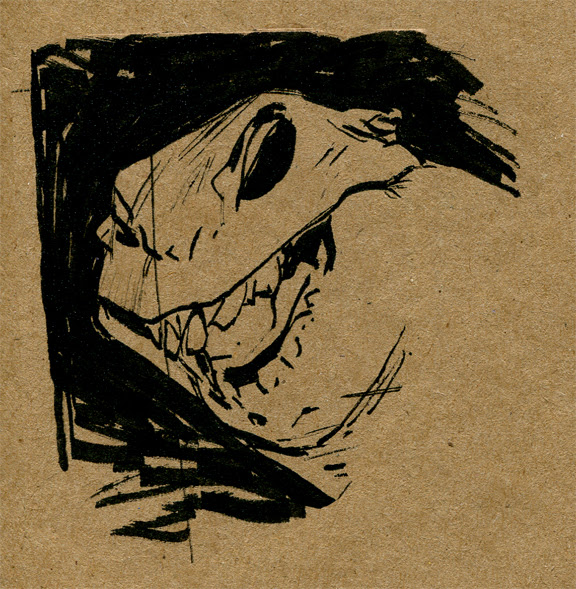 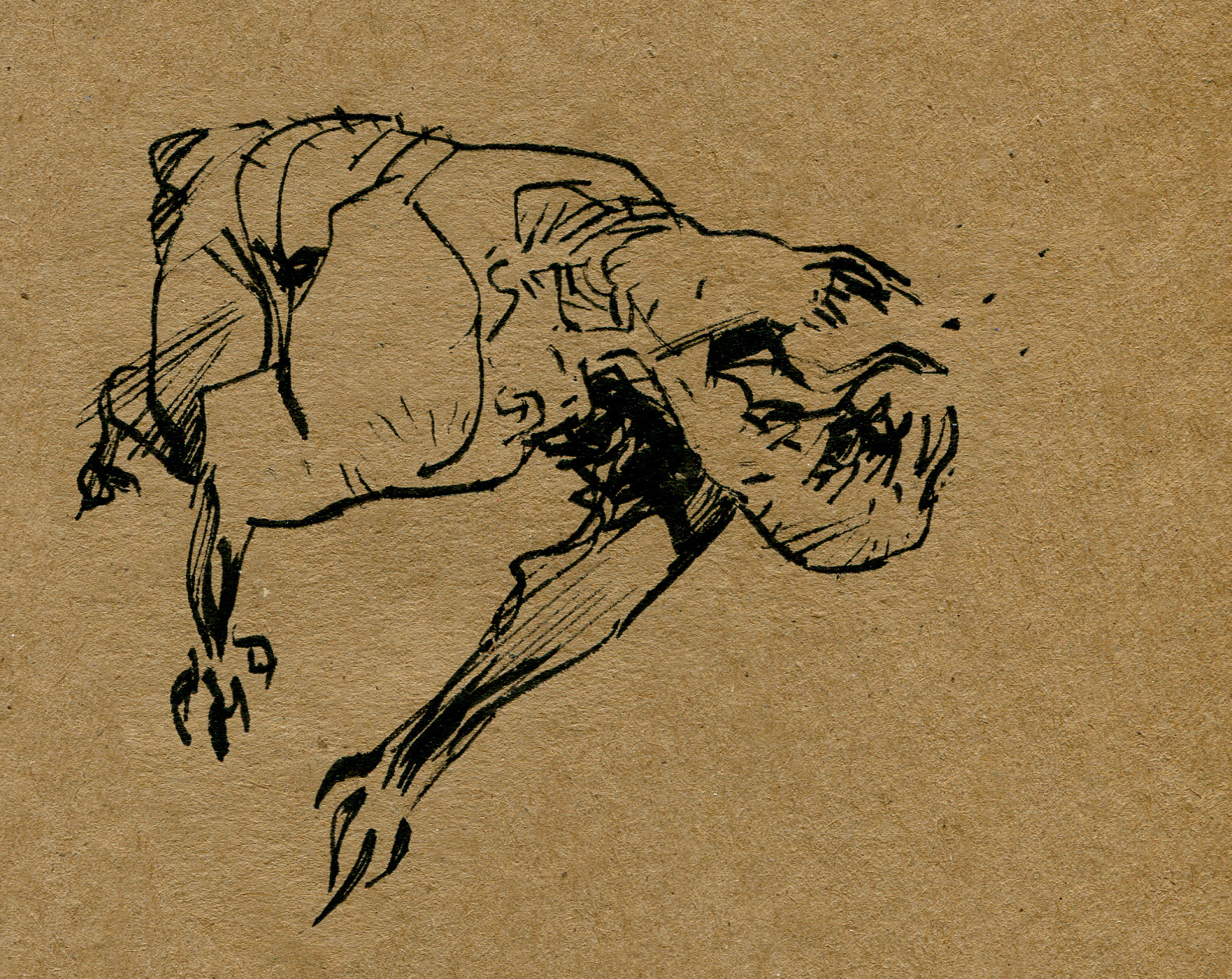 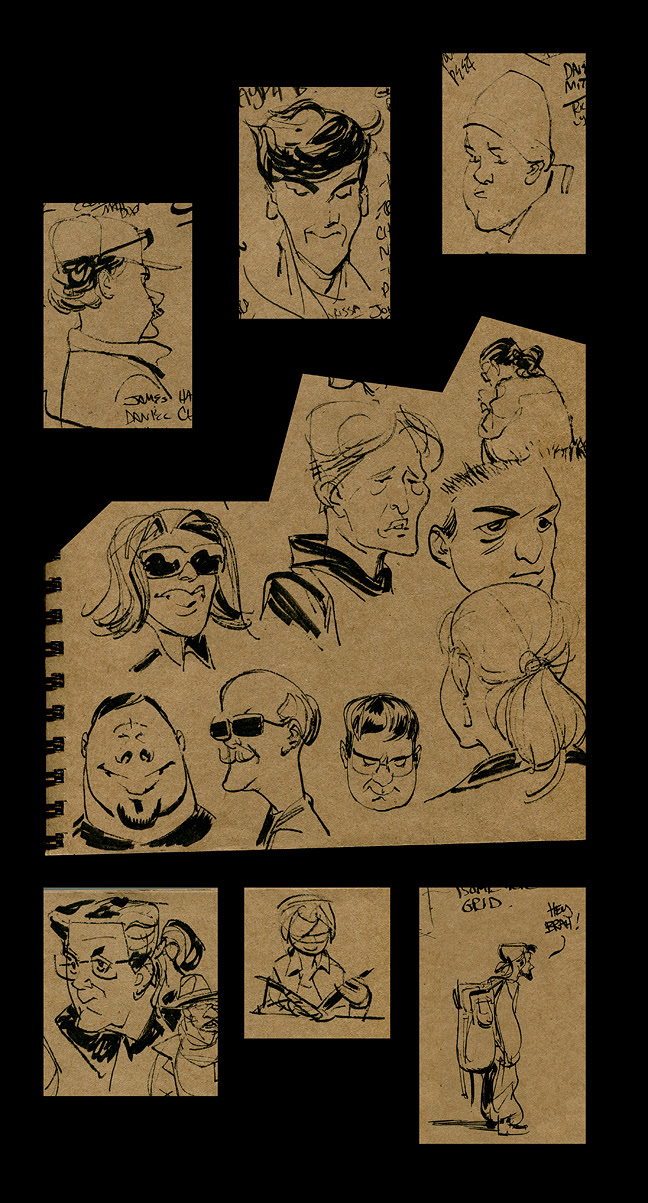