Today's pose was a long one, so I decided to return to an approach that made sense to me.  Since I had more time, and knew the pose was bound to shift between breaks, I made my first page a "cheat sheet." This not only helped me troubleshoot the major problems, but gave me something work from on later pages after the model had descended the stand.

Stuff that was important to me :
-her arms draped over the stool and the lean of her body to the left -- I knew these were things I'd need to exaggerate to sell her "at rest" quality, lest she appear too bolt-upright.
-the strong crease at her waist, and the corresponding stretch of her belly
-her hands hooked together  (Crazy difficult -- could have spent a whole session on this)
-Her hair (the darkest aspect) cascading down her chest seemed the least labor-intensive way to show the planes of her shoulders, sternum and breasts. Drawing it as it appeared (frayed and hanging straight down) would counteract the desired three dimensional look.
-The fact that I'd drawn her foot off the "portrait" twice told me I needed a "landscape" canvas orientation.

I applied these notes on my second page, but lost the 3D quality of the stool due to background darkening, and an eagerness to pop her body out against the drop cloth (because that's what I was seeing).  The darkness competes too much with the darkness around her head, which is meant to be the focal interest.

My third  drawing (the one I'm happiest with) pushes the left-leaning angularity, and uses her hair as a framing element for her head, which I tilted away to expose her neck.  I wanted this to say "pretty" rather than "drowsy."  I also took liberties with the shape of the drop cloth, using it to eliminate the edge of the model stand, which didn't serve my composition.

It was a poor choice, however, to place that stray hair on her breast.  Distracting.  Betrays form.  Even though something like that *was* happening, it's an example of how being faithful to what's there isn't always the best way to make a picture.

Now that I've called out a few of my own failings, here's where I see others going wrong :

-pencil-measuring proportions
My guess is that Seattle's atilier schools teach this.  While it may have some merit as an occasional fact-checker, using it to construct a figure rather than a gestural underpinning assures a dull, lifeless result.  Precise measuring is no substitute for thinking and feeling, at least where art is concerned!

-filling the page from top to bottom, condensing the body in order to fit it all in
Congratulations.  You've just drawn Brick Woman.

-overstating creases by the nose, mouth and under the eyes
Their intent is to show likeness, but all they do is transform a pretty young girl into an old, ugly ape.

Thanks to everyone who made it out for Motive8! Here's two shots from that. The rest are from last night.

Went back to the palette generator and tweaked the hue adjustments *more* to see what results it would produce.  Answer : birthday party. 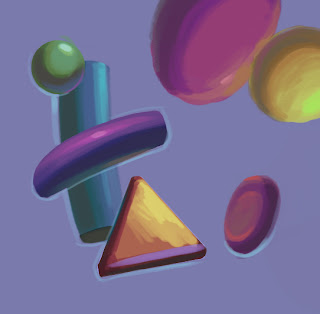 I'll keep doing these until I reach the end of the alphabet, but I'm no longer concerned with doing something that starts with the letter. This is more about me spending time with color each day and making progress. Subject matter is moot.  Drawing quality is moot. 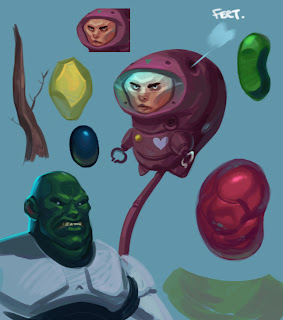 Seems better if I knock it back in places, and punch the original saturation through in others... 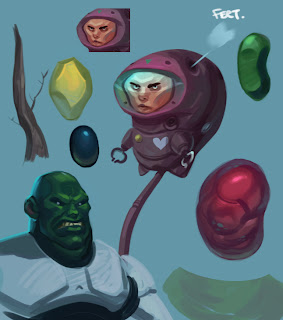 Anthony Jones generously sent me a video tutorial on color (How nice is that?), which I've attempted to use in tandem with yesterday's discovery.  He suggested that colors really only make sense in the context of a unifying "mother color."  This was consistent with Daniel Chavez's helpful comments on establishing a color hierarchy.

I've seen this done retroactively by using colorized hue/sat adjustment layers with the opacity reduced, photo filters and color balance.  On-the-fly, it can be achieved by choosing a hue, dappling it on the "mother color" (at a lower flow) and using the resulting blend rather than the original full-on hue.

AJ also pointed out that the hue jumps in my pre-fab palette were a little big, so I've gone back into the adjustment layers and made them all more subtle.

Thanks so much, man.  Lucky to have you as a friend. 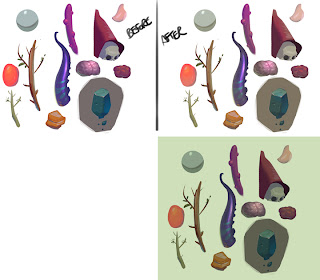 
I love Adobe’s Kuler extension (which helps you generate swatches ‘n’ such) but I never cared for how you can’t color-pick directly from it.

…so I made this simple palette generating PSD.
[Download Version 1, for a limited time, here.]

How it works : Fill the active layer with your foreground color and the grouped adjustment layers do the rest!  Then just use it to color-pick from.

Mix in the complementary color with a low-flow brush, and the results are kinda nifty.

Discovery : hard round brush set to a flow of 10% makes a good color blender. 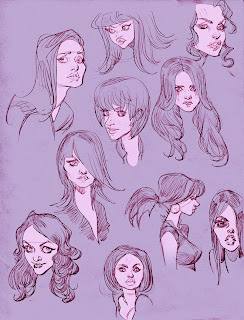 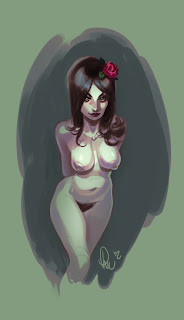 And reworked after feedback (Got the green off her face and other foreground parts.)... 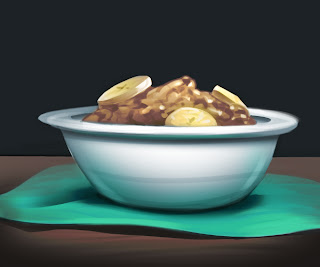 It helps me to think of eyes as twin mouths gobbling spheres. 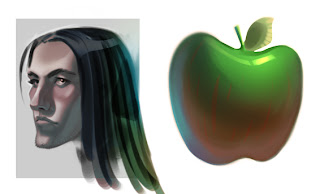 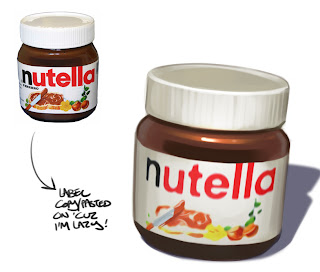 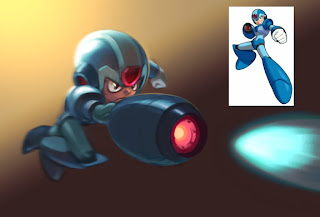 Training cntd. -- grayscale Lorax image produced with feedback from coworkers.  The goal is so simple, yet today was one of the hardest art days I've had all year.

Color was applied, but to hideous effect.  I may try again tomorrow. 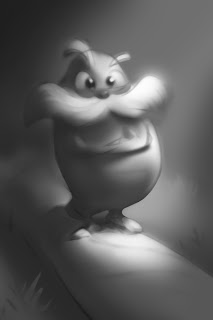 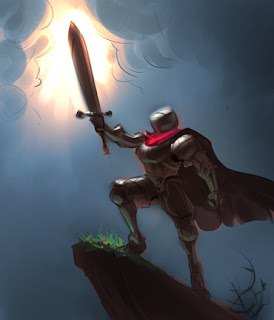 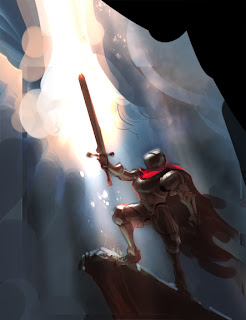 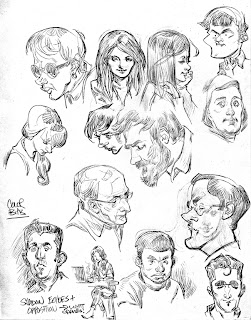 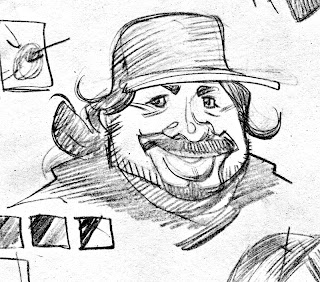