Peter Konig did a 15 minute painting demo for me today.  We needed something that wouldn't require a lot of forethought, so I suggested a potato.  Instead, Peter made this fuzzy alien tumor thing.  (It's potato-like?) 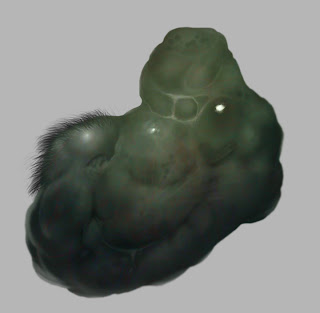 He told me that if I was going to post this, I had to include a disclaimer that I'd forced him to paint it at knifepoint, blindfolded, with both arms tied behind his back and a Wacom stylus jammed up his peehole.  Which is, of course, absurd.  Like I'm going to blindfold a guy!

I really like how he left some recesses lighter than the areas around it.  Pete  has a sculptor's approach to painting -- very organic and non-methodical; really cool to watch.