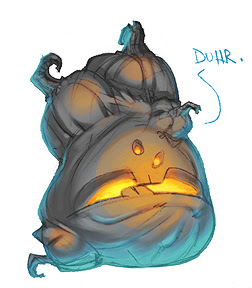 Here's a quickie-style tutorial on quickie-style Photoshop coloring by way of adjustment layers and masks. Folks with a firm grasp of color theory probably paint directly, or do a full grayscale version for glazing, but if you'd rather fiddle with sliders until the right combination presents itself, this way can prove fun and experimental. At the very least it may help lay the groundwork for a more "serious" treatment. If anything seems roundabout, it's because I'm still working the kinks out for myself. Some stages were omitted because, frankly, taking all these screenshots was a royal pain in the ass. 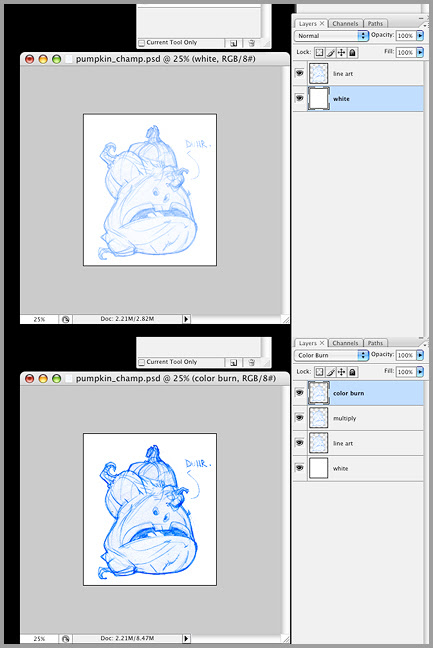 ^^^To make a crispy-clean line drawing I'd normally do a black pass over these blue pencils then lift out the blues and cyans via hue/saturation, but today I was impatient and just wanted to start coloring something. Like this little douchebag. Here I knocked his background out with magic wand, plopped him over a white layer and beefed up the lines with multiply and color burn layers that I then merged into one. 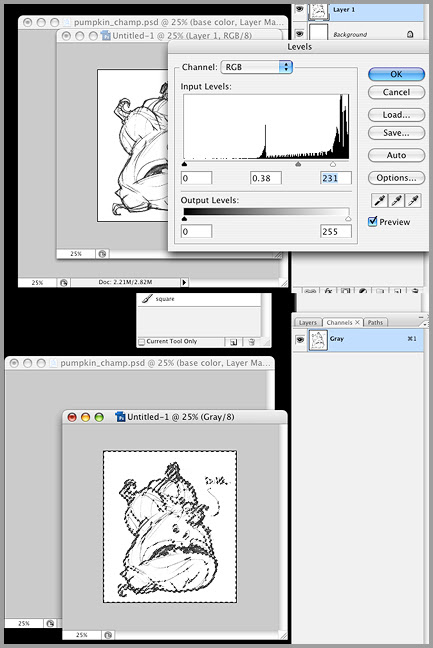 ^^^Before going any further, I dragged my merged line art into a new, grayscale psd, leveled it, and made a selection of the gray channel. I later inverted the selection and copied just the lines back into my RGB psd for reasons that will become apparent near the end. 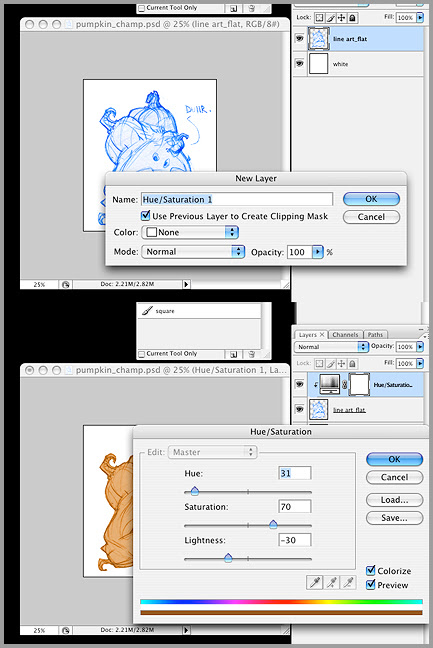 ^^^Going back to the original psd...Here's where I introduced my favorite thing : the hue/saturation adjustment layer! I created it directly above my original line art layer, being sure to put a checkmark by "Use Previous Layer to Create Clipping Mask." I then checked "Colorize" and moved the sliders around until I found a base color I wanted to work over. 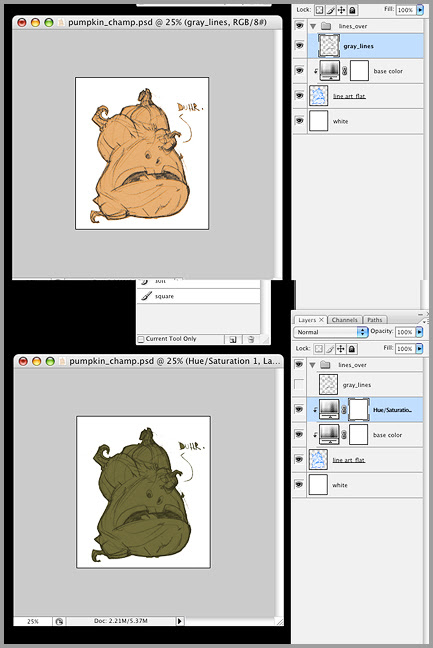 ^^^Here you can see where I copied my grayscale lines back in. I positioned them above everything, then hid the layer. I could have done this earlier or later -- didn't really matter at the time. // I created another hue/saturation adjustment layer (checking the same properties) which I set to a random, darker value. This will be my shadow layer. 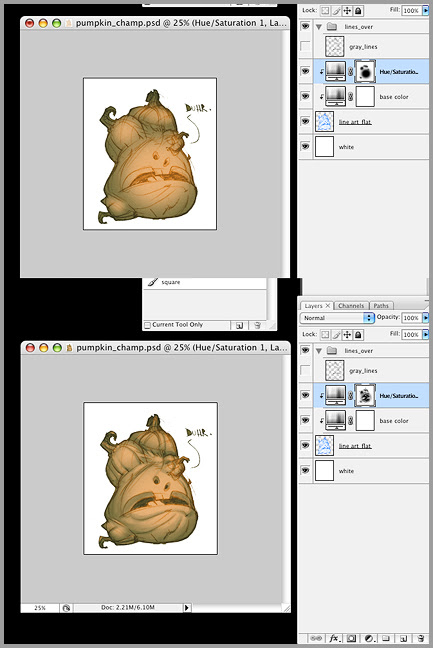 ^^^Here's where the fun began! Since I was working with masked adjustment layers, the only two values I needed to paint in were black and white. I used a big, puffy black airbrush to dispell bits of my shadows, then a smaller, more precise white brush to paint back into them, toggling back and forth as needed. << 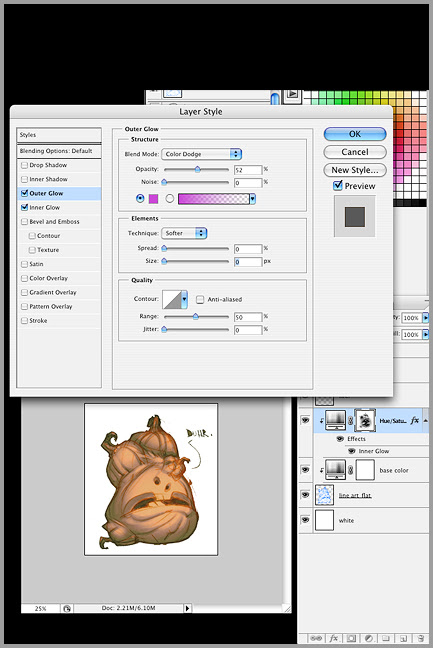 ^^^Also fun : You can give these adjustment layers effects (>blending options)! By messing around with inner and outer glows, you can introduce color variation without having to paint a thing. Play around with the blend modes, opacity and the spread/size of these until something tickles you. NOTE : generally it's best to do this near the end, when your overall color scheme is more final. 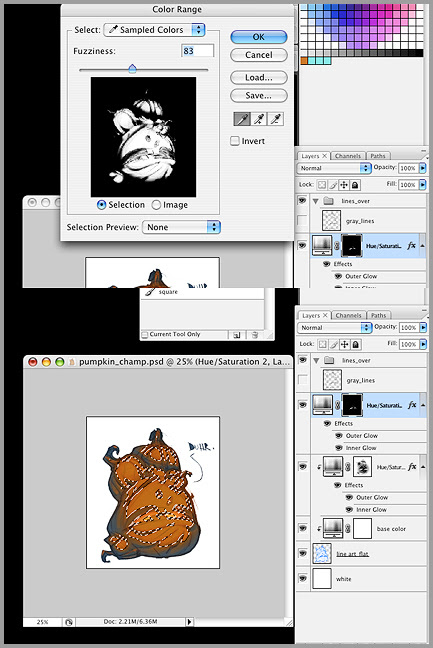 ^^^At this point I cranked the lightness back by fiddling with my first adjustment layer, then used "color range" to select the mids. I used this selection to create a 3rd stacked adjustment layer for my highs. A fourth was created just for the mouth and eyes, which, with the help of effects, turned from just one pale yellow to a fiery shift between orange, yellow and red. A fifth was created for the stalks, to make them darker. 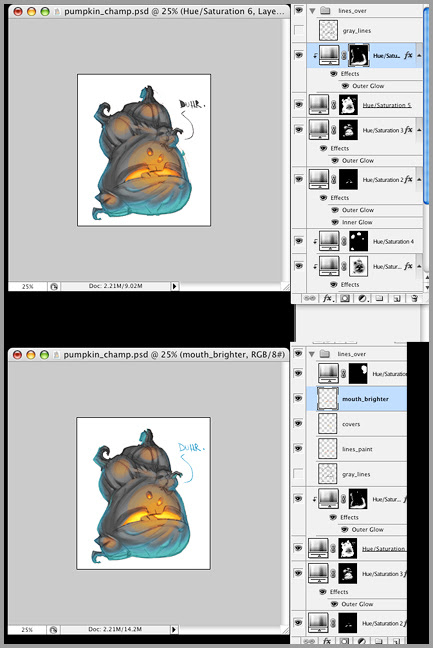 ^^^After moving the sliders of all these adjustment layers around, changing their types, fills and tinkering with their effects, I made a sixth adjustment layer for some uplighting, which I set to "linear dodge." I then used my hidden gray line art layer to make a selection, and did some final line colorization and cover-ups. Viola!

The beauty of this method is not just its simplicity (painting in black and white on layer masks) but its malleability. If you need to make a slight or drastic tweak, you can do so quickly with minimal effort. I could hand you this psd and you could create a new (and probably much better) comp in seconds. Moreover, when you make changes to your bottom-most adjustment layers, you will see your top-most ones update in real time. This can get chuggy with larger files, but is nevertheless cool to see. The more harmonious your color choices, the better Photoshop will mix them for you.

Quite a bit can also be done to the flattened file by using "replace color" to shift desired regions. You can alternatively use "select > color range" to create still more masked adjustment layers, and not have to flatten anything. But that's for another tutorial...

That's awesome! Thanks for sharing your workflow. I'll have to try some of this the next time I sit down to color some linework.

Yo, Paul is right, thank you so much for sharing your work-flowz mang!!!
Your work is sick-sauce!!! (awesome)
so is Paul's, did you see his blog, wow.
Kudos to the boht of youze!!!

Im doing a practice version of this tutorial using my own line art. I'm having trouble following your instructions, it seems that after creating a new layer, check marking "use previous layer to clipping mask" and after setting the layer to hue/saturation, clicking colorize.. the sliders only affect the line art.. where is the step to fill in or use brush in to fill color during this step? I found myself filling in the color on a separate layer setting it to multiple..

Your screen shots only display one layer for this step, any advice?

Don't sweat it, Sashine. This tutorial is over 3 years old. I would recommend finding your own way, as I can barely remember what I was doing then, or why.

I discovered everyone has their own methods achieving relative techniques. we love your digital paintings. thanks Paul.