I met Clement Sauve once in person at San Diego Comic Con -- had no knowledge of his work prior.  Needless to say, I was blown away, and he immediately skyrocketed to the top of my influence list.  In the coming year, I began a correspondence with him, and was amazed by how giving, insightful and encouraging a person he was.

Clem, I learned today, recently died of cancer.  He was 33.

Below are some snippets of things he wrote to me, which I feel are good for the community read in order to better understand his work and how he went about executing it so deftly.  You can tell by his tone that he was as good humored and humble as he was driven.  It's my hope that, as we mourn this substantial loss, other resources will emerge to help those of us who didn't know him nearly well enough in life become better acquainted with the artist and the man. 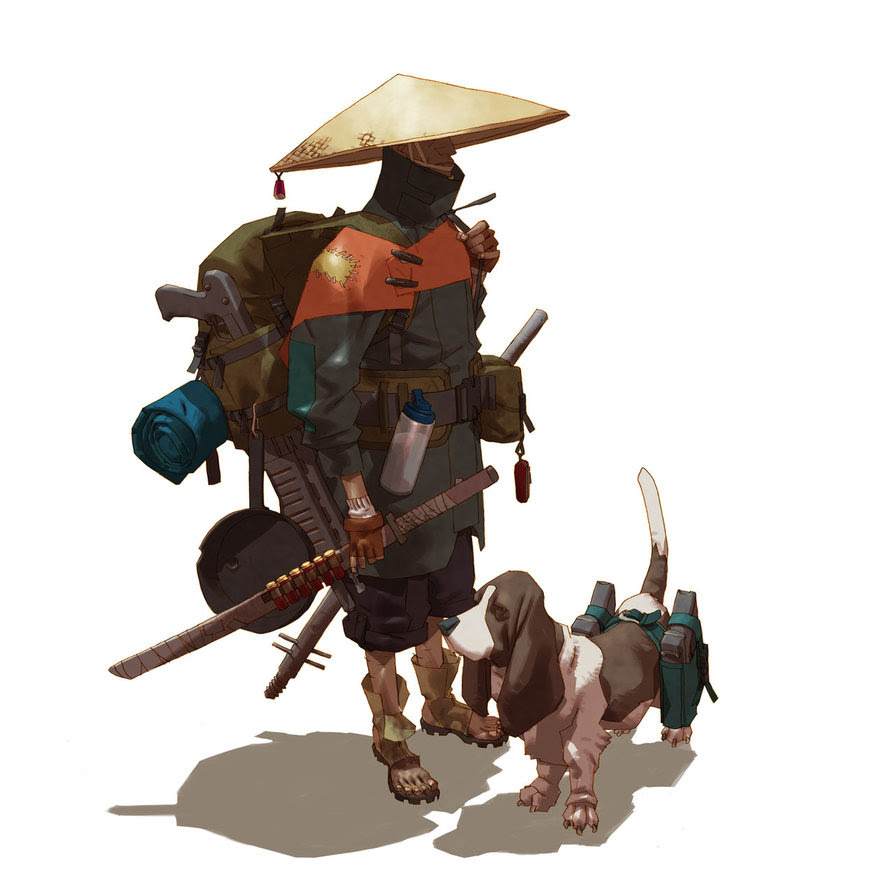 My name is pronounced SO-VEY, but don't feel bad, nobody manages to pronounce it correctly. And yes, I get Suave a LOT, including in credits, con badges and checks....


There's not exactly a big design industry here since Ubisoft and EA have only been around for the last few years and all my friends and the local artists I know work in comics in the US and Europe, so I'm slowly figuring out how to do this on my own, and I've only started doing color work for designs last year. I wouldn't say that the couple of years I spent penciling comics have been misspent, but I wish I had fallen in the design industry sooner because it's helped me grow a lot quicker than comics have.


I do work from enlarged thumbnails, and you're not the first one to be surprised by how loose the end result ends up despite me "tracing" thumbnails, but there's no big secret behind it.  I just don't do the thumbnails tight enough that I could trace them.  I just do the basic shape and pose of the character, and I leave myself a whole lot of room for actual object and details.  It allows me to fill entire 11 by 17 pages of little designs really quick, then just blow up and print the ones I want. I started doing that for the Transformers gig, cause they wanted a lot more variations than i was used to, and I needed to find a quick way to figure out if a design worked or not. I thought the technique worked well, so I've been using it since then. As for the designs themselves, they're a direct results of reading "making of" Star Wars books and listening to commentaries for animated series and movies.  Basically, I want the design to be unique enough that you could recognize it just by looking at an outline drawing of it. It works well for Star Wars ships and Simpsons characters, so I use the same principle. Of course sometimes, sadly, the clients don't allow enough freedom to do that, as you surely know, but I still try to muscle in as much input as I can.


...my friends were singing the praises of Manga Studio's inking tools. The best I could come up with was "I don't want something that flattens out every single imperfection. I'm illustrating an idea, no making a Kanye West record."


I keep doing the same white and gray rendering because it feels safe and I can get it done fast, but I really gotta start exploring a way to throw some quick colors on my designs. I still can't figure out how you manage to actually draw in Photoshop though, even with a Cintiq.  I've seen people do it at EA, I have a friend who uses it, but I just can't.  Every time I've tried it felt like if I was trying to throw a ball with my left hand. My brain just can't send the right info to my arm and hand to make it happen.


I guess it's one of the inconveniences of working in-house, having to once in a while do stuff you have no love for, but as you probably know, that happens working as a freelancer too. When I get a list of shit to design, you can be sure there's at least 1 or 2 things on there that make me go "Ah, fuck, not only is that ridiculous, but I have no absolutely ideas for it." I guess it's that part of the job that really makes it a job :)


re: animation designs // ...it's really funs stuff to do and it's almost more challenging than the regular design stuff because you really have to boil the design down to the simplest elements, and concentrate on the shape rather than the details, and I really love that.


I used to color the line work according to whatever I was outlining, like yellow hair would get a yellowish outline, blue pants would get a blue outline, etc., but while that looked good, it was really a cheat because there's no way that could have been reproduced on a 20+ episodes a year show. I figured that they hired me to design something and give it an overall direction with both the design and color, and that while the end result was pretty, I really wasn't doing my job if all if what I ended them was something that wasn't physically possible to achieve. Don't get me wrong, I do expect the end result to look nothing like my designs, but that [wont' be] because there was no possible way that they could have matched the original design with their production process. I still color the linework...but I pick a single color that works with everything, usually red, and maybe do a little bit of specific line coloring here and there, like the freckles or the eyes.


Finishing is not one of my strong suits, and I definitely prefer the initial stage where all the creation happens over the polishing stage. My thumbnails are usually pretty much unintelligible for anybody else but me, but once in a while I'll bust one out that's a little bigger, and surprisingly clear, and I'll just think "Well, I'm pretty much done." but sadly I still have to turn it into something I can send my bosses.  Honestly, most of the time I simply get through it the same way a kid gets through eating his vegetables, I bolt myself to my chair and chow down and get it done.  I'd love to say I try to get it done fast, but that never turns out well. I've found that the faster I try to go, the more stressed out I am about everything that doesn't work, and I keep having to start over.  So now, I just draw. I just put pencil to paper, and get it done with no rush, and amazingly, working that way, I'm actually faster.


It's weird how it's almost impossible to fuck up drawing a guy, like that's almost like the default setting on every artist, but it's really easy to fuck up a girl and have that girl look a little odd.  I guess I'm still learning a lot when it comes to drawing the ladies because when I started doing comics, I didn't have to draw a girl for like 2 years, so I'm a little behind on that, and while I CAN do a girl, and a sexy girl and a chubby girl, I still struggle with the subtleties, and I try to resist popping out hips and drawing half-winking eyes, because when I do it, it just feels like I'm stealing from guys like you, Hughes and Vatine who can do all that sexy stuff without it looking forced.


All I could think of when they showed me [artists's work] was "Shit, all that time spent on rendering and painting, and no time spent actually designing."

Preach it, Clem.  And thank you.

My Twitter feed erupted today with the news of his passing and I'm filled with regret that I hadn't heard of him until today. What an amazing talent and tragic loss.

Thanks for the post Paul, very appreciated to get insight into his amazing work.

Fantastic post Paul, so young with amazing talent....very sad day but his work will always continue to inspire us all.

I was literally talking about how awesome he was today and then I found out he passed away. He was awesome, and will live on in his art.

wow .Thank you so much for sharing this Paul.

Sad news.. thanks for the post. Never knew much about clement, so this is a very nice spotlight on a bit of who he was.

Thanks so much for the kind words and tribute. He will be missed. He was such an amazing artist, and I know his work will continue to influence for many years to come.

Thanks for the post Paul. I worked next to ol' Chris Ortega above me here for about nine months and I swear Clement came up every time we had a design conversation.

Impressive works indeed. I find his approach of design over... premature polish very agreeable. Exploratory iterations can make a design/mass so much stronger. The part about the subtleties of female faces being a struggle resonated with me as well.

Also, I'm 33. I feel like I'm standing in the starting block with 40 years of productivity ahead of me (I've been standing there for a while now). News like this makes me contemplative.

Man, that is a real shame. Thanks for sharing.

Thanks for sharing this. It also goes without saying that this was an incredible loss, and I'm even more saddened to hear of this after having just learned of his work. Great artist, great designer. RIP - too young...way too young...

He was an all around awesome guy. Thanks for posting your exchange with him. Rest in peace, Clem.

Rest in peace, Clement.
And thanks for sharing part of his thoughts with us ..

Still shocked about this, been a fan of his for a few years following his work pretty avidly. While I didn't know him personally his work definitely struck cords with me and still will.

Hey Paul, thanks for posting these. I've been a fan of Clements for a few years and this is incredibly sad news.Rest in Peace.

Wow. Total bummer. Well, I guess not total. He left the world with a brilliant reminder. R.I.P. Sauve.

Wow. Total bummer. Well, I guess not total. He left the world with a brilliant reminder. R.I.P. Sauve.

Thanks Paul, for this very moving post. I didn't know of this amazing artist until now. May he rest in peace and his art live on.

Late per usual. I fell in love with his stuff about a year back on dA and hearing this just breaks my heart. Thanks for the share, some great insights and a wonderful view inside his head.

Thank you for sharing these, he was someone who I really looked up to.

I have seen his work before...absolutely badass! He was a year younger than me and is a huge reminder not to take time for granted. Much respect Clement, rest in peace.

Paul, thanks for sharing.

great job Paul, I nice sendoff for a big open space left behind by his talent.