Upper right : While Jurassic Park was in the bathroom, I was able to stealth-capture one of his abstract masterworks with my cell phone camera. Kinda says it all, doesn't it? I'll bet when someone gives this guy a delicious cake, he uses it as a doorstop. 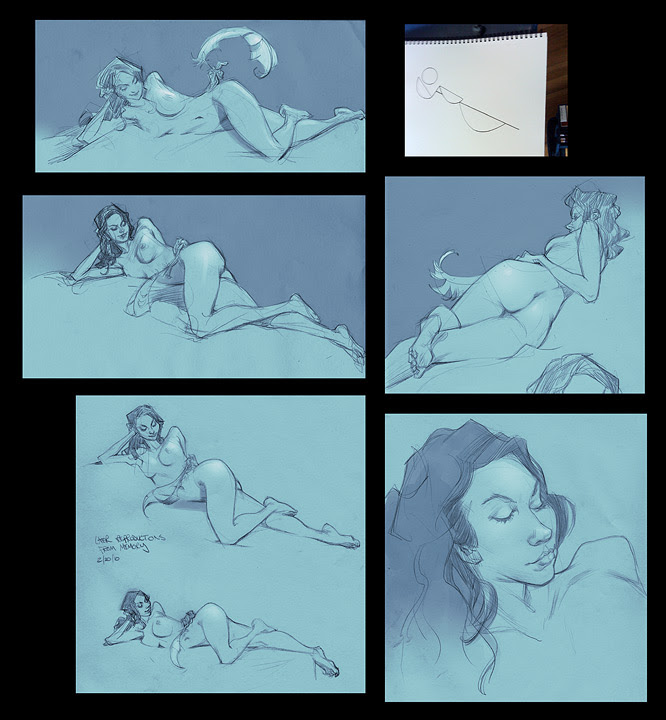 Later, to see how much I'd absorbed, I tried redrawing the pose. Wound up breaking her in a bunch of places, but eh...a few things stuck. Not much point in going to these things if you can't retain anything.

Your latest adventures in that pre-historic land are hilarious, Paul. I'd like to see your "cartoons" of that specific characters.

Anyway. Great studies. My favorite of this series is the back view one.

I find myself looking forward to the events of your figure drawing sessions almost as much as the art. Keep them coming. :)

Every life drawing group I've attended has a motley cast of characters/curmudgeons. Most of them are older and drawing seriously for the first time. There's the occasional 'serious artist' who puts out stuff that makes you just gag. No proportions, no solid anatomy, etc.

If it weren't for the older, crabby, eccentric folks out there with the motivation to attend, orchestrate, organize, schedule, and make available the open studio style life drawing sessions for a few dollars per session, they wouldn't exist at all.

And then, once in a while, you run into some old man/woman that is a serious bad ass when it comes to drawing the figure and they might just want to share some knowledge.

I'm in good with the moderator, make no mistake. And there's a dude who comes in and does AWESOME charcoal portraits. I often wish there was more of a learning component to it; everyone's off on their own. If there was anyone at these sessions worth glomming onto for knowlege, I'm sure I'd be a barnacle on their hull...but ehhhh...hasn't happened yet. I'm keeping my eyes peeled...

Have you considered the possibility that YOU are the one other people look up to?

I've been figure drawing on and off for maybe 15 years. At some point I even organized sessions that were quite sucessful (with the mandatory older/weirder folks) and let me tell you that someone of YOUR level is a rare sight.

That sketch from the back is beautiful.

Been meaning to comment on the total lack of ellipses, angular line segments, and hyperbolas in your figure drawing.

I think you should stealth-draw these characters and turn them into video game characters where they are professional wrestlers or Alice in Wonderland type villains. Or some other genre where you can caricature them. Danger Girl villains!

Actually I'd love to hear you tell the story where Crabby Pants Pastel catches you drawing her as Jabba the Hut's love interest.


Damn dude, just bring a camera and set it up facing the artists. Let us watch this engaging drama unfold. That'd be awesome. I'd watch it...